Continuing our WASD theme of South Devon’s weird landscape, let’s turn our attention to our haunted coastal route – the current A379 Teignmouth Road. The historian Theo Brown remembers her father saying that during the nineteenth century nothing would induce anyone to walk from St Marychurch to Shaldon after dark. This road was said to be haunted by Spring Hill Jack, a place where “balls of fire would roll out of the hedges in front of people who ventured there at night”. 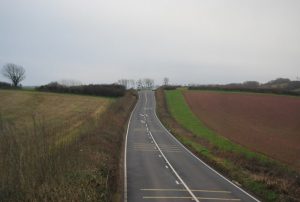 Spring Hill Jack is clearly a local variation of Spring-Heel Jack, a notorious and vicious ghost prankster who terrified people throughout much of the nineteenth century. 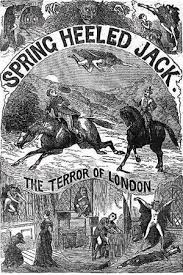 Jack was described as having a terrifying appearance, clawed hands, and eyes that “resembled red balls of fire”. It was claimed that, beneath a black cloak, he wore a helmet and a tight-fitting white garment like an oilskin, that he had a “Devil-like” aspect, was tall and thin, and had the appearance of a gentlemen. Other reports mention that he could breathe out blue and white flames and that he wore sharp metallic claws at his fingertips. 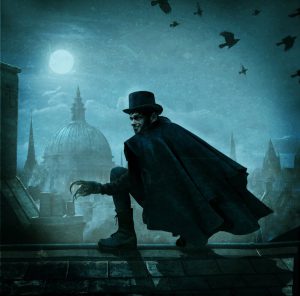 One of the very first sightings of Spring-Heel Jack came in October 1837, when a woman by the name of Mary Stevens was walking to Lavender Hill in London when a tall, coated man leapt from the building into the street. He then grasped her with his metal claws, and while kissing her, began tearing at her clothes. After her screams were heard, the aggressor fled the scene, leaping back to the building he originally came from. Other London sightings then followed and later that year Jack made it to Brighton where a gardener saw “a bear-like creature run along a wall topped with broken glass, which then jumped down and chased the frightened man before scaling the wall and escaping”. Jack’s visits  were then reported to be happening all over Britain and were especially prevalent in suburban London, the Midlands and Scotland. It was at this time that he made his appearances on the outskirts of our fair town of Torquay. 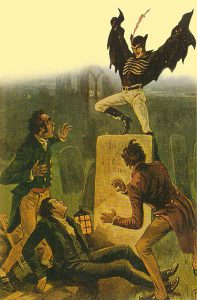 Between 1870 and 1890 Jack began to take on a more “devil like persona and look”, with people saying they had seen wings instead of an overcoat. Witnesses also reported that he had either the face of a “demon or devil” or was wearing a mask. Due to the tales of his bizarre appearance and ability to make extraordinary leaps, Jack began to appear in news articles, early novellas and ‘comics’. 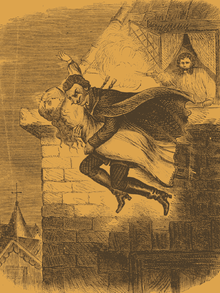 Sightings continued in the twentieth century and moved further afield. Between 1938-1945 Jack made dozens of appearances in the Cape Cod area of Massachusetts, though in the US he reportedly belched flames. In Provincetown a resident blasted Jack with a shotgun, but the man told police “the darned thing just laughed and jumped my eight foot fence in one leap”. In 1953 three people saw a man bounce into a pecan tree. They described the man as either having wings or wearing tight clothes and a cape, and “encased in light.” he “just melted” into the darkness – a “swooshing noise” was heard over the rooftops, apparently made by a bright, torpedo like object. In 1973 in North Carolina a family reported a gaunt, long haired man with pointed ears and glowing red eyes, taking 60 feet long leaps. In 1979, more than a dozen folk in Texas saw a creature, described as ten feet tall with pointed ears, cross a football field with just a few strides “like those taken by an astronaut on the moon”. 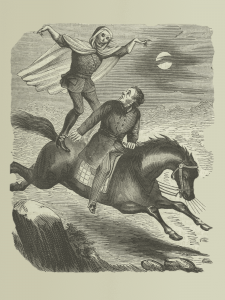 So why did Jack take residence in a quiet Torquay lane when he seemingly preferred leaping from city rooftops? One suggestion is that his visits coincide with an increase in smuggling. In the 18th century illegal trade along our coast had grown at a prodigious rate. What had previously been simple small-scale evasion of duty turned into a huge industry. The high rates of duty levied on tea, wine, spirits and other luxury goods made their import and the evasion of the duty a highly profitable venture for our impoverished fishermen and seafarers. On the other hand, if the men were caught, they were hanged.

The first steam-powered ships appeared only in the early years of the 19th century, so sailing ships brought the goods from the continent, and kegs and bales were manhandled – often up sheer cliffs – to waiting groups of men. These carriers then transported the goods either in carts or caravans of ponies, or lashed the tubs to their own backs for a journey inland.

Smuggling acquired a kind of mystique. Torquay visitor Robert Louis Stevenson wrote in ‘Kidnapped’: “The thievery was boasted about and romanticized until it seemed a kind of heroism. It did not have any taint of criminality and the whole of the south coast had pockets vying with one another over whose smugglers were the darkest or most daring. The Smugglers Inn was one of the commonest names for a bar on the coast”. That other Torquay resident Rudyard Kipling advised people to “watch the wall while the gentlemen go by” so that they could truthfully say that they saw no smuggling taking place. 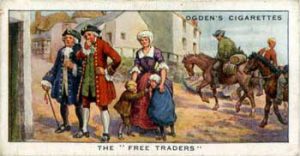 There are many legends about our local gangs and how they evaded the Revenue men. Many rural Torquay roads were considered to be haunted and this undoubtedly aided our smugglers. It was reported that, “At Brixham there was a man who took the brandy inland: this he did with a hearse painted with phosphorous; the horses had their feet padded in order to travel quietly, and the driver was got up as the Devil himself. When this conveyance was on the road everybody fled from it in terror”. It was further “remembered in Paignton that the horses’ heads were sometimes covered with black sacks to make them appear headless.” 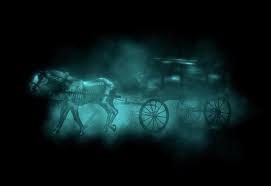 Smugglers were certainly also active on this side of the Bay. In Park Road, St Marychurch, there was a small house used by smugglers, where there was once a hiding place under the hearth. Maidencombe Farm and Rocombe Farm also had places for concealing barrels of brandy. Between Barton Hall and Kerswell Cross there was an ancient and battered hollow oak known as ‘The Brandy Bottle Tree’. This was used as a cache by smugglers landing kegs at Watcombe well into the nineteenth century. 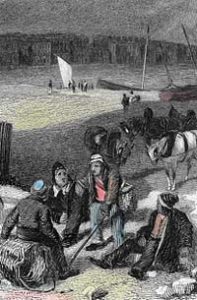 The proposal is that our local villains invented or imported stories to keep locals indoors at night and to dissuade passers-by – Spring-Heel Jack was the ideal bogeyman for those dark Torquay lanes.