Like all teenage girls, Gambira enjoys dressing up. She was so keen on this stylish sack dress that she wore it for several hours.

Gambira, 16, is one of five Bornean orang utans at Paignton Zoo Environmental Park in Devon. The sacks were donated to the charity by the Costa Rica Plantation Company of Torquay. Hessian is a natural fibre and so it’s ideal for the animals.

Curator of Mammals and Director of Operations Neil Bemment said: “This behaviour is showing both the intelligence and curiosity of orang utans. The keepers cut holes in the sides of the sacks but after that it’s up to the orangs how they use them. It’s great enrichment for them – it stimulates them mentally and physically and tests their dexterity.” 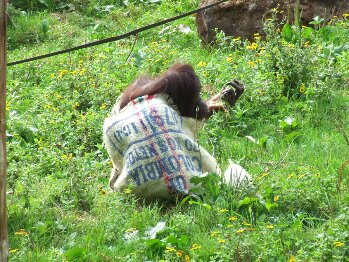 The inventive orangs use sacks in other ways, too. “They will use small pieces of fabric to soak up liquids to suck or chew. They also shelter under the sacks as they would giant leaves in the wild, which is practical if it is hot or wet, or if you want a bit of privacy. Getting into a sack is just playful curiosity.” 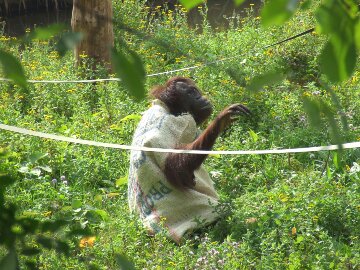 Paignton Zoo’s Bornean other orang-utans are females Chinta (22) with her baby Natalia and Mali (18) with her baby Tatau. Bornean orang utans have suffered declines; the population is now estimated at around 50,000. To put this in context, there are fewer Bornean orang utans in the entire world than there are human beings in Torquay (the population of Torquay is about 62,000).

The Bornean orang utan (Pongo pygmaeus) is threatened by hunting, the pet trade and the destruction of its rainforest habitat. Forest is being destroyed to create palm oil plantations. Given the declining populations, measures such as switching to alternative oil products and maintaining sustainable populations of orangs in zoos are becoming ever more important. Paignton Zoo Environmental Park is a registered charity. For more information go to www.paigntonzoo.org.uk or ring 0844 474 2222.

Keep up to date with what’s happening in the area, join us on facebook