Emergency services were called to reports of smoke coming from a basement flat in Torquay early yesterday evening.

Fire appliances from Torquay and Paignton were mobilised to the incident in Upton Road. 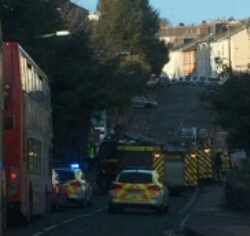 A spokesperson for the fire service said:
“On attendance of the first appliance crews confirmed there was fire in the basement of the 3 storey block of flats, crews got to work with four breathing apparatus, a hose reel jet, a thermal imaging camera and safety jet. All persons from within the property were promptly accounted for and the Police were required for traffic control.”

The fire was extinguished and a positive pressure ventilation fan was used to clear the property of smoke.

The basement lounge suffered 30% complete damage from fire and a remaining 20% of the flat was damaged by smoke.