This week Devon and Cornwall Police launch a new campaign targeted at students and young people to help change attitudes to sexual offences.  The #NOBLURREDLINES campaign will target men and women aged between 16-37 to educate and inform them that sex without consent is rape.

The campaign is targeted at potential victims and perpetrators, with the message that  there are no blurred lines when it comes to rape and to dispel the misconceived notion that most rapes involve a stranger.

In reported rape cases 75% of the victims had already met their attacker and during Freshers week a student’s judgement may be affected by peer pressure, alcohol, drugs or just lack of information.

The campaign uses a striking pop-art image of a couple locked into moment of tension, with a potentially threatening situation and uses reference to music culture style with the hash tag #NOBLURREDLINES. 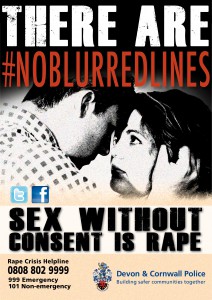 The phrase that has been coined across the globe in a backlash to Robin Thicke’s controversial track, Blurred Lines, that was banned by student unions across the country.  Students are being given festival wristbands with the message to support the campaign for a rape-free culture as a visual reminder to consider their actions, plus there will be an active social media campaign to encourage a discussion of the issue.  This will be promoted through various student channels, our new Facebook page as well as the usual force social media channels at facebook.com/DevonandCornwallPolice and on Twitter @DC_Police.

Detective Chief Inspector Brett Mitchell said: “We are hoping this clear message will reach out to young people right across Devon and Cornwall in order to change behaviour early on in their lives.   We’re want to make sure people understand that consent must be given prior to sex, otherwise it’s rape.  Rape can ruin the lives of both victims and perpetrators.  Being drunk or under the influence of drugs is not an excuse either.”

Kitty Gardner, fourth year history and politics student, University of Exeter (former president Gender Equality Society) is in favour of the new message:  ”This campaign is so important.  It is positive that there is an increasing awareness of the issues women face with regards to sexual assault. It is imperative that a victim blaming culture does not become the norm, but that we challenge this and work towards a safer future.

“This is a matter which is particularly prevalent at the beginning of university; the high intensity and vulnerability of students means that we must take this problem and raising awareness about it seriously.”

If you have been affected by rape please call the National Rape Crisis Helpline 0808 802 9999, or for emergencies the police on 999, or dial 101 for non-urgent matters.

Devon and Cornwall Police will be launching the campaign to the wider community over the coming months to raise awareness to all ages as the region sees a significant increase to rape reporting in October and November leading up to the Christmas and New Year party season.

Do you recognise this man? Police appeal after city attack