Fire crews were called to a car fire at
Hesketh Crescent, Meadfoot, Torquay this morning (6 September) at around 7:20am 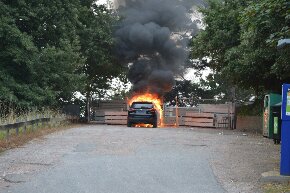 One fire appliance from Torquay attended a car on fire in a car park.

It was deemed the car had been set alight deliberately, and Police also attended.

The car was completely destroyed.

Duty of care was left with the Police.