My daughter Tayla who tragically killed at a steam fair on the 8th September 2012.

Tayla was only 5 years old she would of been 6 on the 19th September 2012 She was such a popular, bright young girl always had a smile on her face.

Tayla was hit by a slow moving land rover at the steam fair. The Devon air ambulance were on scene and transported her to hospital, where she later  died from her injuries.

My friend Aiysha is doing a sponsored skydive in memory of Tayla and to raise money for the Devon air ambulance along with the cystic fibrosis trust. 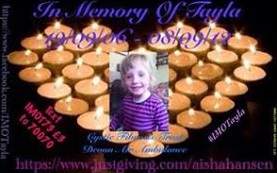 This weekend sees the return of Torquay's pedal car grand prix at Torre Abbey Meadow.Now in it's 41st year, the event on Sunday 21st July is a full day of family fun with the 2 hour endurance race sta…