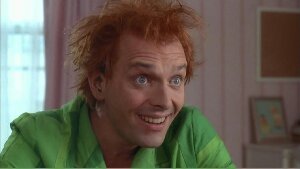 The London Ambulance Service and Metropolitan Police were called to the house in Barnes, south-west London, but Mayall was pronounced dead at the scene at 1.20pm.

Rik Mayall’s wife, Barbara, says the cause of his death is unknown: “Maybe he had a fit, maybe it was his heart. We just don’t know”

Mayall survived a near-fatal quad bike accident at his farmhouse in Devon in 1998, he suffering a fractured skull and two brain haemorrhages. The accident left him with epilepsy for which he took medication.

The comedian appeared as Rick in The Young Ones, Lord Flashheart in Blackadder, Alan B’Stard in The New Statesman and Richie in Bottom, and had a long-running partnership with Ade Edmondson, who was amongst those who have paid tribute

“There were times when Rik and I were writing together when we almost died laughing. They were some of the most carefree stupid days I ever had, and I feel privileged to have shared them with him. And now he’s died for real. Without me. Selfish bastard.”