Cyclist in hospital with ‘life threatening injuries’ after Torquay collision

A cyclist is in hospital with life-threatening injuries after being in collision with a lorry in Torquay.

Emergency services were called to the A380 Riviera Way yesterday (29 July) after the collision happened at Browns Bridge Road at around 4.40pm.

The lorry, a MAN 7.5 HGV was travelling towards Newton Abbot when it was in collision with the cyclist who was crossing the carriageway.

The rider, a 49 year old from Paignton, received serious injuries and which are described as life threatening.

He was initially taken to Torbay Hospital but was then taken to Derriford Hospital in Plymouth.

A specialist forensic investigation of the scene took place and the road was fully opened by 10.15pm. 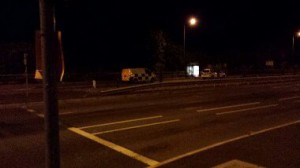 Police from the Serious Collision Investigation Unit are appealing for witnesses to this incident to contact them on 101, quoting log number 618 of 29/07/14.

Torquay Road after accident between lorry and cyclist

Guest blog: The effects of bullying.

Guest blog: The effects of bullying.