October saw the 40th Anniversary of the creation of Dartmoor Search and Rescue Team (Ashburton). To celebrate, black ties were tied and posh frocks were worn to a formal dinner where current members and past members and their partners mingled with honoured guests from Devon and Cornwall Police, Devon Fire and Rescue Service and Dartmoor National Park.

The event was held in the magnificent surroundings of the Grand Hall of the Dartington Hall Trust. The Grand Hall was first build in the 1400s and this historical location with its vaulted ceiling seemed somehow fitting to represent the endurance and resilience of the rescue team. We were extremely grateful to the Dartington Hall Trust for the donation of the use of the grand hall for this event. 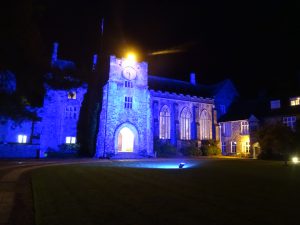 As the Dartmoor Search and Rescue Team (Ashburton) Chairman, Alec Collyer said at the event :

“1976 saw the formation of the Ashburton team which had a handful of members and a few bits of gear in a drying shed behind Ashburton Police station. Today we have 60 members ready to respond 24/7 and 365 days/year using equipment and undertaking training which in some cases would be unrecognisable to those who joined the team all those years ago’”

Alec closed his speech in toasts to absent friends, a recognition of the support we all receive from family, friends and organisations enabling us to do what we do and to the future of the team.

Alec modestly forgot to mention he was one of those early starters when he was in his late teens and he is still an active hill member and Hill Party Leader. 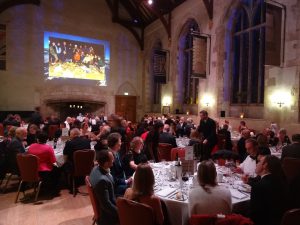 Standing in for the Chief Constable was Chief Superintendent Jim Nye, Commander, Alliance Operations Department, Devon & Cornwall Police. In his speech he said:

“It was an honour to attend the 40th anniversary of Dartmoor Search and Rescue Team (Ashburton), For 40 years DSRT Ashburton have worked very closely with the police to ensure the public are safe when visiting and working on Dartmoor, and more recently I have seen DSRT Ashburton helping the police in the urban areas of Devon as we look for missing people. I have always found the DSRT Ashburton volunteers to be very professional and dedicated in what they do. They turn out, day or night, regardless of the weather conditions. Our communities can be rightly proud of these people and I look forward to our close relationship continuing through future decades”

As a current member who has clocked up a mere 10 years with Dartmoor Search and Rescue Team (Ashburton) it felt a real privilege to attend the event and reflect on all that we achieve as a group of volunteers from disparate backgrounds but all harbour a love of the outdoors and a desire to give something back to their community.