Detectives investigating the death of a 17-year-old boy in Kingsbridge returned to the town one week after the tragic event to appeal for the public’s help.

A murder enquiry was launched after the death of Alex Peguero Sosa, from the Kingsbridge area, who was found with fatal injuries at a bus shelter in Prince of Wales Road around 2.20am on 6 July.

Lee Dent, 42, of East Portlemouth, Salcombe, has been charged with murder and remains in custody following an appearance at Exeter Crown Court on 10 July.

Detectives and local officers returned to Kingsbridge on Saturday night (12 July) to hand out flyers and appeal to the local community for further information to assist with the enquiry. 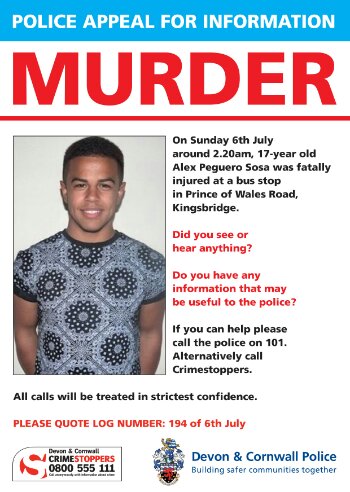 “The people of Kingsbridge were very welcoming and I would like to say a huge thank you to everyone who came forward to either give information or to simply speak to the officers in general.

“This was an important part of the investigation and we would still welcome any information the community may have about Alex’s death.”