It’s a lazy summer afternoon, you’re lounging outdoors with your pals and you stand up and happily scratch your belly. It’s a scene repeated in thousands of back gardens across the country every Sunday. Except 12 year old Kivu is a Western lowland gorilla at Paignton Zoo in Devon, so he has rather more hair on his belly and one thing is missing – there’s definitely no BBQ!

Gorillas don’t usually stand upright on two legs, although 12 year old Kivu has been seen standing on more than one occasion. The behaviour is not thought to be as common in gorillas as it is in some other primates – like humans. 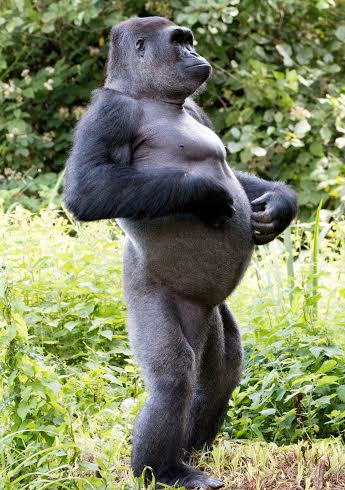 Paignton Zoo Curator of Mammals Neil Bemment, who is Vice Coordinator for the gorilla European Endangered species Programme, said: “It’s not unknown for gorillas to stand like this – mainly we find it comical because it reminds us of us! It has been suggested by primatologists that standing up can be a sign of dominance, but I think he does it just to get a better view and because he can!”

Kivu lives in a bachelor pad with four other young guys, but that’s not a beer belly he’s scratching. His diet of mainly raw vegetables helps him to maintain a trim figure – for a gorilla. He weighs a heathy 175 kilos (27 stones).

Kivu moved to Paignton Zoo in 2006. Regarded by his keepers as a very smart gorilla, he loves playing with the public through the window. His favourite food is lettuce, which he always eats first. Paignton Zoo is currently home to five male gorillas. Kivu’s pals are silverback Pertinax, Kiondo, N’Dowe (pronounced Endovay) and Matadi.

The charity’s bachelor group of Western lowland gorillas – a Critically Endangered species – plays a vital role in international gorilla conservation, providing somewhere for young males to grow up in a social environment. Some have moved on to be the dominant males in bachelor or family groups in other collections as part of the European breeding programme. Matadi is about to leave Paignton Zoo to go to Howletts Zoo in Kent, hopefully to become a breeding male.