Drinkers may be asked to do a breathalyser test if they appear drunk before they allowed enter some of Torquay’s pubs and clubs. From Monday, people are deemed too drunk will be refused entry.

#RU2drunk is a joint scheme between police and licensees and will run at 23 of the resorts busiest pubs, clubs and bars during December. It aims at reducing the amount of alcohol related crime.

Funded by Police and Crime Commissioner Tony Hogg and backed by licensees, #RU2DRUNK will see door staff using breathalysers to breathalyse any customers they think may be too drunk to gain entry.

Each premises will decide if they want to set a limit, but anyone giving a high reading may be refused entry by door staff who have been trained by police to use equipment normally used for roadside breath tests. 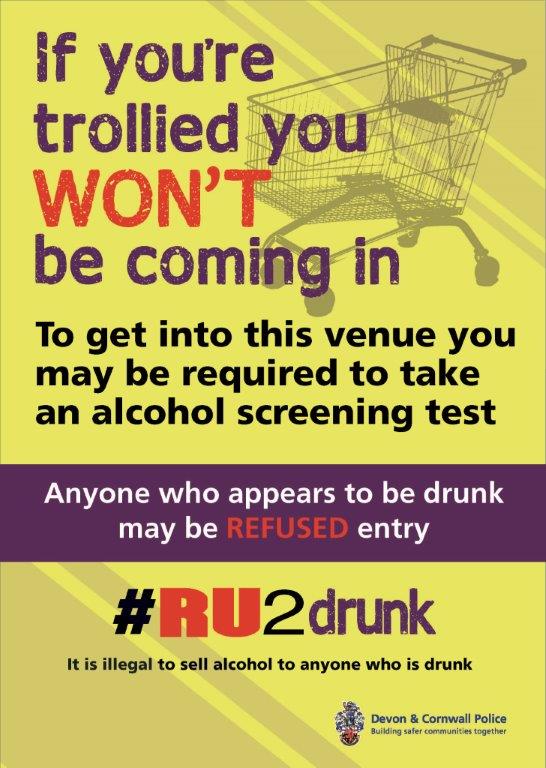 In Torquay, approximately 20 per cent of all violent crime is attributable to the evening and night time economy and the majority of these offences happen in the harbour side area.
Police have increased patrols in the area and work with partner agencies but now want to work more closely with licensees who identify pre-loading as one of the biggest contributors to alcohol related violence.
And while drunks bring significant costs to licensed premises, figures show they spend as little as £7 per head when they do get in.
Mr Hogg said he is very happy to support and fund the pilot.
“The impact of alcohol related crime on our communities and public services is not sustainable.  If we are to address this issue we need everyone to play their part; public services, communities, licensees and drinkers. I am delighted to see the trade united in taking action here,” he said.
“Drinkers need to realise there are immediate consequences of getting too drunk on a night out. Drink too much, too early and your night out may never get started!
“Pilots in Norwich showed a dramatic reduction to alcohol related crime and if we see similar results from the Torquay pilot I will be encouraging wider roll-out in Devon and Cornwall”.
Force lead, Chief Inspector Neil Ralph said: “This pilot is not there to ban fun, or stop patrons from coming in, but to keep Torquay safe so everyone can have an enjoyable evening, free from trouble.
“In December we usually see an increase in alcohol related crime and we hope the ‘breathalyse on entry’ pilot will be an effective tool in reducing this.
“Trials in other parts of the country have seen a decrease in alcohol related offending, contributing towards safer evening and night time economies”.
The scheme has already been rolled out in other parts of the country including Loughborough and Nottingham and been successful in reducing violent crime.
“I would like to commend the licensed trade in Torquay for their support in respect of this pilot; it demonstrates a commendable attitude to making what is already a safe  environment even safer.” Said Ch.Insp. Ralph.