After my last very hard and distressing article [here] I am letting others write this one.

Firstly the account of a local teenager of her experiences and how badly she was affected .

Again it is distressing but it is written by her in her words. For obvious reasons identities are not used.

This account was sent to me and was copy/pasted in it’s entirety.
I cannot stress strongly enough how brave this young lady has been in allowing me to share this with you:

When the bullying first started I didn’t really take much notice of it, because I thought maybe if I ignored it they’d leave me alone, but the more I ignored it the worser it got. I didn’t tell anyone for a while that the bullying was happening because the bullies messaged me one evening saying if I told anyone then they’ll come back at me like a ton of bricks. I got scared and felt so alone and isolated because I was too scared to tell anybody. The messages got worse, and I was to scared to go college each week because that’s where the bullies attended. They called me stuff like “emo” “ugly” “frigid” “Slut”. When people say “sticks and stones my break my bones, but words will never hurt me” well words did hurt me, they really hurt me, especially the ones they kept calling me. My self confidence just went straight down. I felt depressed, sad, and just numbness. Everything just got too much for me, getting told too “kill yourself” “go 6 feet under”. So I decided to take all of this out on myself, I started self harming because I just felt so worthless, and I just needed to find ways to cope. Back then it felt like such a relief, almost like I was letting out all of the bad. I felt depressed and angry each day, because the bullies kept targeting me, so I carried on harming myself. I felt like a grenade ready to explode, it was all just getting too much. I eventually told a friend about what was happening and about the harming, and they told the school and also my parents. I got so mad and angry at them because of what the bullies previously said to me if I told anyone, and the bullies found out that the school New, and my parents New, and they came down on me twice as much. It almost felt like they were enjoying making me suffer, getting some sort of satisfaction from the messages they were sending me. I couldn’t take much more of it, I felt so worthless, so unwanted. My mother saw the messages and immediately got the police involved. The school, police and my parents all helped to stop the bullying. And I am so thankful that they all succeeded. I felt so much relief knowing I wasn’t going to get grief at college anymore, and I would not receive anymore messages from them. 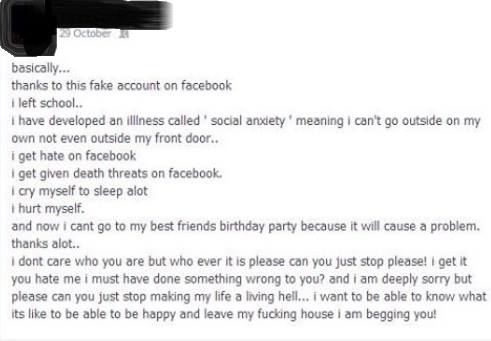 So what can WE do?

What can the Police do?

Here is a statement written for this article by one incredibly committed hard working Police Detective:

It is no secret that law enforcement right across the globe has had to adapt to the demands of tracking and tracing the electronic suspect. This adaptation has taken place quicker in some Police areas across the United Kingdom, than it has in others. We have all become accustomed to contacting the Police when we need help following something that happens in public, with the Police having many years of experience in helping people involved in incidents or preventing a disturbance or threat to life. Users of the Internet also have an expectation that Police are available to assist for example, when goods do not arrive, or when offensive messages or pictures are sent across the Internet. Some Police areas have adapted quickly to these requests for service, others have not been able to do so as quickly as they would have liked.

The Devon and Cornwall Police have had the capacity to investigate Internet dependent and Internet enabled offences since 2001. There are many Internet enabled offences such as bogus listings on auction sites which are often referred to as old crime using new technology, and there are Internet dependent offences such as the hacking of websites or unauthorised access to a database which is new crime using new technology. The Internet has brought and will continue to bring, huge benefit to all those that seek to use it for all the right reasons, however there are many that seek to misuse the Internet.

The Devon and Cornwall Police Internet investigation team is staffed by Detective Constables whose role it is, is to track and trace those that seek to harm and disrupt our communities. This is no different to patrol officers who are protecting the public and keeping people safe every day by responding to calls for assistance in a very visual way. The team are experienced, have training in those areas that are important, such as computer crime and communication act legislation and have an understanding of how to apply the law when attempting to locate users who are causing the most harm. They have good working relationships with industry including internet service providers and with those companies who provide web based services that are often the most misused. The Police service cannot do everything when working to locate a suspect and it is important that everyone plays a role in keeping themselves safe on the internet. Many matters that come to our attention could be prevented with the use of suitable virus protection and firewall software and ensuring that updates are applied to your computers and mobile devices.

Some calls that are made to the Police are linked to suspects who undertake a course of action that is offensive and would not be prevented with any software or computer based protection. Those calls are often from parents who have discovered that their children’s names have been the subject of bogus account creations on social media platforms and those accounts have then gone on to be misused in the most vile way, resulting in the person whose name has been copied receiving retribution from those who believed the work of what has now become commonly known as a Troll or cyber Troll.
Despite the anonymity that the internet provides, the Devon and Cornwall Police will respond positively to those complaints
which involve Trolling on a sophisticated and sustained scale. A Troll shows no remorse and will use whatever material is available to provoke debate and incite discontent on the Internet. No user is immune and often the unwanted attention can go on for very long periods of time. This can have a very debilitating effect on those targeted and who chose to read what is written or have no method of avoiding what is written about them.

It is important that as users of the Internet we work together to expose Trolls and protect each other from those who seek to exploit vulnerabilities in young people such as appearance or family background, by bullying both at school and on the internet – there is evidence that this does make them more attractive to the keyboard of the anonymous Troll.

Our message is to use the report and block features of many websites and apps to stop continuing misuse. Do not engage with a cyber – bully or Troll, tell teachers or parents if you feel you are being targeted and finally do not embark on bullying or trolling behaviour yourself. The tracking and tracing opportunities that are available to Police are extensive and we will use those opportunities to trace and prosecute those that are active and causing the most disruption to our communities.

If you engage in Cyber Bullying you WILL eventually be caught.

If you are being Cyber Bullied you can get help and support.

I sincerely hope that I have somehow managed to raise a greater awareness not only to Parents but also to our teenagers.