Update (6th December): The suspect was not found.
There was a search on 29th November after a man was acting suspiciously and on the 27th November when a young woman was followed: https://wearesouthdevon.com/police-appeal-witnesses-young-woman-followed/

Police in Newton abbot have been out searching for an intruder this evening.

Police on the ground were joined by the police helicopter.

An intuder was disturbed in the garden of a private property. 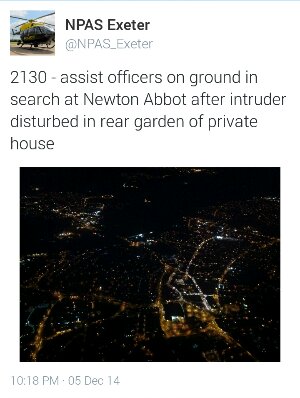 They also posted an aerial shot of Newton Abbot.

There is no update as to whether the intruder was caught.

Locals have stated there has been a high police presence in the town with a large number of police and police dogs joining in the search.