A call to the Coastguard from the member of the public triggered the first call-out for the charity’s volunteers at 11.15am. A person had been reported possibly in the water and attempting to climb on board a boat near Powderham Castle on the west bank of the river Exe.

The inshore lifeboat George Bearman with three Crew volunteers on board launched from the old lifeboat station slipway, due to the strong winds and high waves. The Shannon class all-weather lifeboat R and J Welburn with six on board also arrived on scene. Experienced Crew volunteer, Andy Stott jumped on board the vessel and checked that the casualty and his boat was safe, taking him aboard the inshore lifeboat for safety.

The casualty had jumped from the sea wall onto his boat to secure the mooring which was dragging. The Shannon Crew volunteers then transferred the casualty from the inshore lifeboat to the all-weather lifeboat to take him safely to Starcross Fishing and Cruising Club.

Within a matter of minutes, the Coastguard National Operations Centre re-tasked the inshore Crew volunteers to the same vicinity.

A catamaran had broken its mooring and was in danger of damaging other vessels in the high winds. The volunteers checked nobody was on board and streamed the anchor.

The inshore lifeboat George Bearman was ready for service at 1.37pm and the all-weather lifeboat R and J Welburn was ready at 2.28pm

At 3.20pm, after concerns for a missing kitesurfer, Lifeboat Operations Manager Kevin Riley launched George Bearman to search the Exe estuary.
A fellow kitesurfer reported that a kitesurfer had been separated from his kite and was being swept out to sea. The inshore lifeboat was launched to the safe water mark, to start the search in poor visibility. 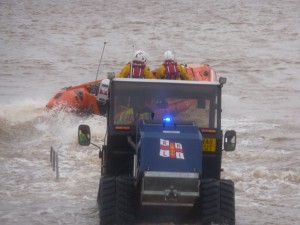 The all-weather lifeboat R and J Welburn stood by. After a 20 minute search, the missing kitesurfer was spotted on Pole Sands with his board and was brought ashore within five minutes by the volunteers.

‘The conditions on the bar were still pretty rough and of concern. Being a priority, we self-launched. The kitesurfers should be credited as they were keeping an eye on each other which was very professional.’