Paignton Zoo scientist Wayne Edwards endured a cyclone, dangerous wildlife and atrocious roads on his latest research trip. Wayne travelled to the rainforests of Madagascar to study golden mantella frogs. But even as he prepared to fly out, he was urgently seeking funding to help him complete his PhD.

“It’s the rainy season, ideal for me as it’s the time when the frogs are most active, probably not ideal for tourists though! I arrived in the capital, Antananarivo, and asked the guesthouse owner why it was so quiet, she said it was because of the cyclone that was due to hit the island later that evening! I had the room by the roof terrace so didn’t get much sleep that night…”

After the cyclone and much higher than average recent rainfall, travel was hard work. “The roads were even more hazardous than usual, with quite a few landslips and large boulders that had dropped into the road.  There were trucks on their sides in ditches.”

As well as fellow scientists, Wayne was accompanied by three guides from local conservation organisation Madagasikara Voakajy, three helpers from a nearby village, one cook, one driver and at times up to ten porters for transporting equipment.

“The paths into the forest areas were worse this time. On a mountain track we came across an old charcoal truck missing three wheels, we couldn’t get the vehicle past so took what we could carry and walked the rest of the way to camp – about three hours. The porters got the rest of our stuff to us four hours later.”

Working in tropical forest is physically demanding. “First of all it’s hot and humid and very slippery underfoot. These places are nature’s assault course, so we are usually climbing over or under stuff as we go. The forest I worked in this time was also on the side of a mountain, so there was the added bonus of a slope to deal with!“It was tougher this time, streams and rice field water levels were much higher, meaning we had to wade or swim a fair bit. I only got bitten by a leech once, though – on the neck. It also continued to rain most days, for much of the day!” 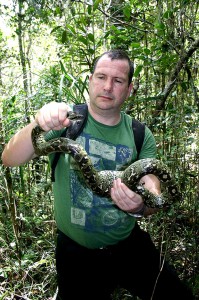 Some of the local wildlife is less than welcoming. “You have to be alert. Grabbing hold of trees or bushes is potentially dangerous because of scorpions, wasps, ants or spiders. You could step into an old root hole with a snake in it – we disturbed a Malagasy tree boa last time!”

Travelling in remote areas in Madagascar is challenging, but it’s also part of the fun.

“I love working in these environments. There’s the possibility of going on a few night walks through the forest with our head torches, when we might turn up some interesting animals!”

Though eating evening meals with head torches proved something of a hazard: “In between mouthfuls I would have to remove the odd beetle or moth that had flown into the torch and then dropped into my food!”

Overall, it was a very successful trip. “I managed to collect the data I needed by surveying three forests surrounding golden mantella breeding ponds. Really, you have to respect the Malagasy field teams, these people stay in the field for up to four months per year. They really do lead the way in terms of active practical conservation. What we do as zoo conservation biologists is back them up. We can help by conducting ex-situ research that cannot be done in the wild or by telling their story and focussing public attention.”

Meanwhile, Wayne’s funding problems are mounting. “My first year of study was supported by ATASS Respect, the not-for-profit arm of the ATASS Group. I’m getting some funding for travel from The Durrell Institute of Conservation and Ecology at the University of Kent, and from the German Zoos Organisation, Stiftung Artenschutz. But at the moment I don’t know how I’m going to pay for the rest of my studies.”

His PhD work, based at Paignton Zoo’s Amphibian Ark conservation centre, is ground-breaking. Wayne, who lives in Torquay, is investigating the habitat preferences of the tiny and Critically Endangered golden mantella and how climate change might affect its survival.

“In the field I was measuring things like light levels, ground temperature, humidity, the number of frogs, their temperature and taking GPS coordinates. It will help me work out what research we’ll need to do in the future.” Paignton Zoo Environmental Park is a registered charity. For more information go to www.paigntonzoo.org.uk or ring 0844 474 2222.