Police appeal for information after assault on fisherman in Torquay

A local man has warned of a new danger at sea after a fish hook got embedded in his face. 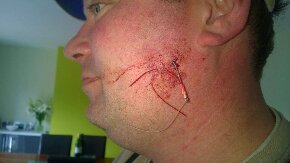 The victim, in his 30’s was fishing off Hopes nose, Torquay at around 6.30am on Sunday 13th July in his 19ft Orkney fastliner boat.

The man went to Torbay hospital where he had an xray and had the hook removed.

It is alleged that an angler targeted him and some anglers in that area have been casting out towards people deliberately.

There were a large number of shore based fisherman in the area at the time and police are appealing to them for information to identify the offender who is believed to have left prior to police attending.

Police are also advising anglers of the seriousness of such actions and the injuries that it can cause.

Anyone with any information is asked to contact police on 101 quoting police reference CR/08931/14 or alternatively call Crimestoppers anonymously on 0800 555111 or report online at www.Crimestoppers-uk.org