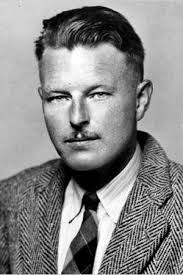 Malcolm Lowry was a serious alcoholic for much of his life. He drank pretty much anything, including hair tonic, rubbing alcohol and after shave. When his condition was particularly bad, he had a trick to stop his shaking hands from spilling his drink. He would remove his tie, place it around the back of his neck, wrap either end around each hand, take hold of his glass, then pull the tie with his free hand, which acted as a pulley, lifting the glass straight to his mouth. 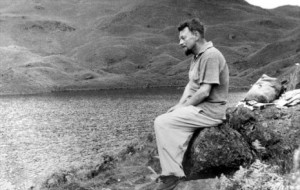 Unlike most drunks, however, Malcolm was a dedicated and brilliant writer. He wrote everything down as potential material for his novels. It was said he couldn’t enter a bar without leaving with at least four pages of hand-written notes – and he was the patron of many such establishments. He’s also very quotable.

Malcolm’s 1947 novel Under the Volcano is the basis for the author’s reputation as one of the most important novelists of the 20th century. He was hailed as the successor to James Joyce, and the novel hit the top of the New York Times Best Seller List. In 1998 Under the Volcano was voted No. 11 in the Modern Library’s 100 Best Novels List.

Under the Volcano tells the story of an alcoholic British consul in a Mexican town on the Day of the Dead, November 2, 1938. The book draws heavily upon autobiographical material and has layers of meaning and symbolism making the book a worthy focus for literary study.

Under the Volcano was made into a film in 1984: 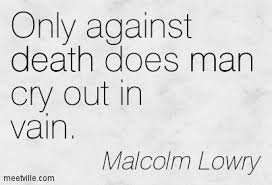 Born near Liverpool in 1909, Malcolm grew up in a wealthy family and rebelled against the expectations of his parents and boarding school. He wrote about exile and despair, travelled widely and drank heavily from the age of 14. All this made him an icon for later generations of writers.

In the early 1930s Malcolm visited Torquay, staying in Warren Road’s Vernon Court Hotel. Like so many other Torquay hotels, the building has been converted into apartments. He wrote in August 1931 that Torquay was, “a funny, tawdry place, on the sea, like a pub picture of China gone crazy, only its got speedboats & plenty of sea & diving boards & this afternoon a cruiser, god knows where that came from. And we shall spend some blue sea mornings here.” 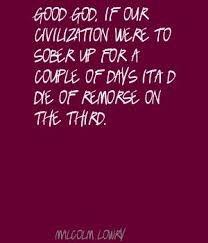 In 1933 he was recuperating in Torquay after a drying-out stay at the Moretonhampstead Cottage Hospital. During his time in Torquay he drove an MG F Type Magna. Nevertheless, his alcohol-associated health problems continued and he reported experiencing severe paranoia. Perhaps Torquay isn’t the best place to sober up… 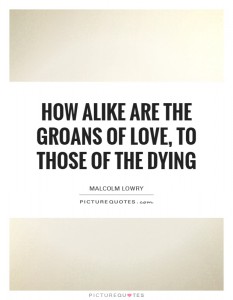 Alcohol is one of the most dangerous drugs to withdraw from. One symptom is Delirium Tremens (DTs), a state of confusion often occurring around three days into the withdrawal symptoms and lasting two to three days. The physical effects may include shaking, shivering, an irregular heart rate, and sweating. Occasionally a very high body temperature or seizures may result in death. People may also see or hear things others don’t, as did Malcolm while swimming on Torre Abbey Sands, “You know they put a nurse on me, to shadow me. You know he was out there in the middle… there… in the afternoon. I turned over on my back to float and there he was swimming towards me. Oh, he’s gone. He’s like that. He just appears and disappears”.

While in town he reported that he had been to see an “American crook film” and a “dilapidated musical comedy called The Belle of New York just so as I could think about the title”. 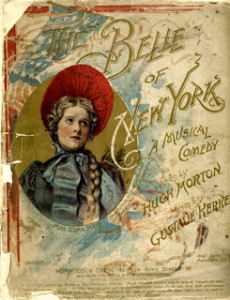 We don’t know if Malcolm was still hallucinating when he described Torquay in a letter, “I told you that Torquay was drab in daytime but at night like a picture postcard of China. It’s a loveable & laughable kind of tawdriness though: harbours full of immense toy battleships, quite cuckoo.”

Malcolm died in a boarding house in the village of Ripe, East Sussex in 1957. His death was caused by the consumption of alcohol and barbiturates. Ever the wordsmith, it’s reported that Malcolm wrote his own epitaph which reads:

“Here lies Malcolm Lowry,
Late of the Bowery,
Whose prose was flowery,
And often glowery.
He lived nightly, and drank daily,
And died playing the ukulele.”