A man suffered from head injuries following an attack in the early hours of this morning (28 September) on Victoria Parade, Torquay.

Witnesses describe an attack where the man was punched from behind and knocked to the ground and left him ‘out cold’.

Nearby security persons tended to the victim who was lying on the road. 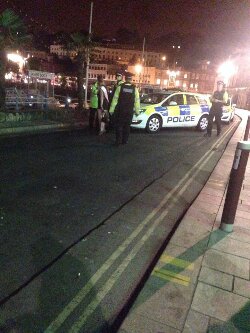 Emergency services arrived on scene and police blocked the road.

The man was taken to hospital by ambulance.

We are waiting for an update on the mans condtion.

We will update when more information becomes available.

Anyone with information should call the police on 101.