Emergency services were called to Chapel Woods, Torquay to reports of a man threatening to harm himself this afternoon.

Police, fire crews and ambulance service were all present at the scene. 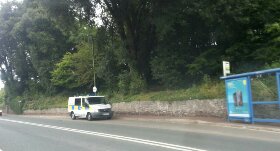 The entrance of the woods was taped off by police during the incident.

The man, who was on a branch overhanging a cliff edge was talked down from the tree and is said to be uninjured.