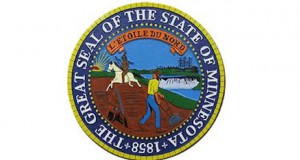 In 1881 the Great Seal of the US State of Minnesota went missing after a major fire in the state Capitol of St Paul.  After being lost for two decades, and assumed by almost everyone that it had been destroyed, it finally turned up – 4,000 miles away in Torquay. 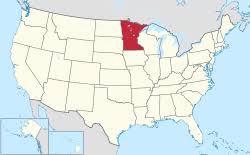 The Great Seal of the US State of Minnesota is the insignia that their Secretary of State affixes to government documents to make them official. The first Seal for the territory of Minnesota was adopted in 1849 and cast in bronze. Although slight changes have been made over the years, the Seal retains the original imagery of the flat plains of this American state – a Native American on horseback is seen riding south and represents its Indian heritage (see above). His horse and spear and the Pioneer’s axe, rifle, and plough represent tools that were used for hunting and labour. The stump symbolizes the importance of the lumber industry in Minnesota’s history. 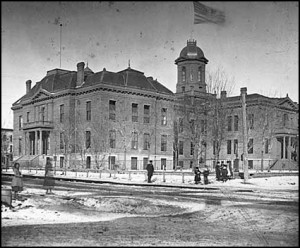 A series of letters in the Minnesota State Archives tells how the Seal become lost in the first place and how it ended up in South Devon.

In 1881 a great fire destroyed the Minnesota Capitol in Saint Paul – that’s it above. The legislature was in session and its members, along with some local residents, attempted to save the valuable documents and artefacts housed there. The Minneapolis Tribune reported that, “Brave men blanched with fear. A thousand thoughts rushed through excited minds, and the distance from the windows to the ground was measured with anxious eyes. ‘Shut the doors!’ ‘Shut the doors!’ ‘Don’t make a draft!’ ‘Act like men!’ yelled the excited crowd, who rushed about the room measuring every possible mode of escape.”

Though there were no major injuries, most of the bills, documents and books in the state library were lost. A few important volumes from the library were saved by, “Chappel, the one-armed janitor of the Capitol building. He lingered in the room until a burning timber fell, striking him on the head. He left then, but carried under his single arm all the books he could conveniently and successfully grasp.”

While no definite cause was found for the fire, an inadequate ventilation system was seen to be to blame – it was early March and the heating was likely to have been turned to the maximum. Others thought a lit cigar was the culprit while there was even a conspiracy theory that the fire was deliberately started to burn down the old Capitol to start work on a new one which had just been agreed should be built. Indeed, by 1883, two years after the fire destroyed the first Capitol, the second structure was completed on the same site. The latest Capitol is pictured below. 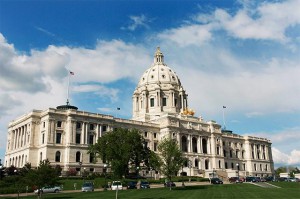 Now comes the Great Seal itself. Being a valuable artefact, the Seal was rescued from the vault where it was being kept and brought out of the burning building. However, in the chaos it somehow “went missing”. It was generally assumed that it had been dropped in the street or had just melted in the inferno. 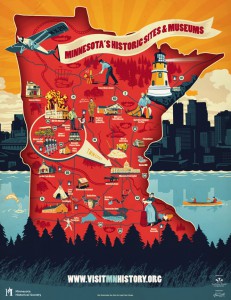 However, on the evening after the fire, a Dutch businessman, Peter Bergsma, had passed the ruins on his way home. He reportedly picked up a bronze object near the corner of College and Wabasha streets and took it home. Peter then returned to Holland taking the Seal with him. He later made the good decision to settle in Torquay.

Apparently, although it “sat upon his desk”, he forgot about the Seal. That was until 1894 when he realised it should be returned to Minnesota where “it should be accorded a place in some of the rooms of the historical society”. Some day, he “felt sure he would meet a person from St Paul who would return it”. 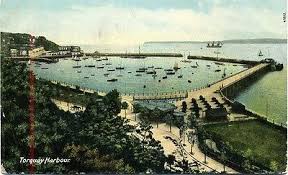 The opportunity came in 1901 when Mr and Mrs William J Dyer from Minnesota called in to Torquay while travelling around Europe – William was a music importer and dealer who knew Peter. The Dutchman saw his old friend’s name in a list of American visitors and called in to the Torquay hotel where the Dyers were staying. Peter then asked William to return the Seal to its rightful home in Minnesota. 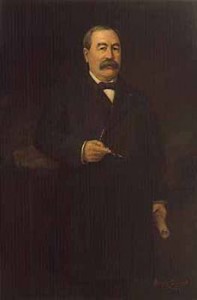 Accordingly, in September 1901 William presented the Seal to Governor SR Van Sant (pictured above). As a new Seal had been engraved immediately after the fire, on October 18 1901 the artefact was donated to the Minnesota Historical Society “to be preserved with religious care”.

After two decades the precious artefact and symbol of the state of Minnesota went home. And – after its long holiday on the English Riviera – it’s still there.