The gardens of Paignton Zoo are now home to four of the largest garden ornaments ever seen.

A large gorilla covered in shells, a towering giraffe and a dazzling butterfly have all popped up in the Zoo grounds in recent weeks.

Barry the Gorilla attended the Chelsea Flower Show before retiring to South Devon, while Gerald the Giraffe was at Hampton Court Flower Show. The (unnamed) painted wooden butterfly was left over from a private event held at the Zoo. They join Herbert the painted life-size gorilla, a veteran of the Great Gorillas Project from last summer, when 30 decorated gorillas formed a free public art trail across South Devon.

Gerald the 12 foot giraffe was the centrepiece of the Growing for Gold show garden created by Jon Wheatly, the Chair of SW in Bloom and winner of 21 Chelsea gold medals, for the Royal Horticultural Society’s Hampton Court Flower Show in London in July. The resin giraffe was sponsored by Paignton Zoo.

Meanwhile Barry was created by artist Fiona Jackson, who runs Pollyfields, an interior design and furnishings company in North Devon. Created for the Chelsea Flower Show, he’s covered in tens of thousands of shells – waste products of the food industry – and took many weeks to complete. 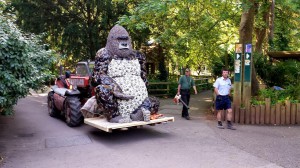 Barry moves to his new home

The 9 foot gorilla lodged with Brixham Primary School after pupils asked if they could have him. When the school closed for the summer holidays, Barry was – carefully – relocated to Paignton Zoo. He can only be seen from the miniature railway.

Paignton Zoo Curator of Plants and Gardens, Giles Palmer, said: “I’ll admit to being a little sceptical when I heard about Barry and Gerald joining us – I thought they were the Chuckle Brothers! But now they’re in place they do look pretty cool and certainly put a smile on kids’ faces. But I don’t think there’s going to be a giant garden gnome here any time soon!”

Zoo spokesperson Phil Knowling added: “We didn’t plan this – it just happened! I think they all know this is a great place for amazing animals!”  Paignton Zoo Environmental Park is a registered charity. For more information go to www.paigntonzoo.org.uk or ring 0844 474 2222