South American fur seal Grace was given slow-release implants in 2011 to control her immune system, which causes problems with her eyes. These have now been replaced.

The implants, under each eyelid, help dampen down her immune system, which is thought to cause white patches on both eyes. The procedure was carried out at Living Coasts’ sister zoo, Paignton Zoo, which has full veterinary facilities including an operating theatre. 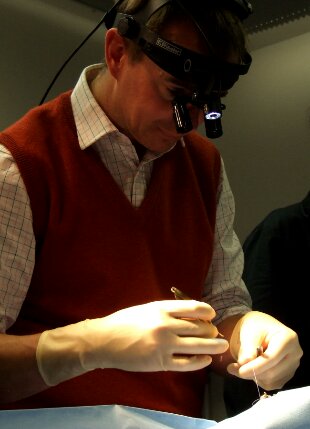 Living Coasts operations manager Clare Rugg said: “We knew that the first implants would run out in about three years. This time the operation was very quick – we simply replaced the old implants with fresh ones. But if we hadn’t done the work, Grace’s condition would have deteriorated again.”

Whenever the zoo vet team anaesthetises an animal for any reason they take the opportunity to carry out a full health check. This includes a clinical examination of all body systems, blood samples, radiographs, weighing and a body condition score. Clare: “The whole procedure went well. And a few hours later Grace was swimming about and eating fish back at Living Coasts.”

Twelve year old South American fur seal Grace has been at Torquay’s coastal zoo for ten years. She developed a corneal ulcer in her right eye when she was a pup at Bristol Zoo and this left a scar. The vet team performed an examination of this scar tissue in October 2008 and placed the first implants in 2011. Living Coasts is a registered charity. For more information ring (01803) 202470 or go to www.livingcoasts.org.uk