Brown spider monkey Paru might be just one year old, but she knows that her prehensile – gripping – tail is a useful fifth limb. 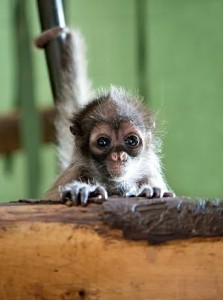 Paru and her mother Sophie arrived at Paignton Zoo in February from Stuttgart Zoo.

Paru was born at the German zoo on 21st April 2013, meaning her birthday was on Easter Monday.

The brown spider monkey (Ateles hybridus) comes from South America, is listed as Critically Endangered by the IUCN and is among the world’s 25 most endangered primates.

For many years Paignton Zoo was home to red faced black spider monkeys, but has featured brown spider monkeys since 2006. The Zoo is currently home to five; in addition to Sophie and Paru, there’s one male – Jean-Robert – and two females – Lijuana and Luna. They have not bred at the Zoo.

Mother and daughter have not yet been mixed with the others. Senior Head Keeper of Mammals Matthew Webb explained: “We are introducing them very slowly as the baby is still young. First they get to see each other through mesh, then we will probably mix the girls first and then all together, indoors only. We are not rushing it.”

Spider monkeys live high in the South American tropical forest, feeding on ripe fruit and flowers. It’s likely that they play an important part in spreading the seeds of many plants. A single youngster is born after a gestation of 225 days (7 months).

Threatened in the wild by habitat destruction and hunting for food, there is some protection for the species in reserves as well as legal protection. Populations in European zoos are managed co-operatively. Paignton Zoo Environmental Park is a registered charity. For more information go to www.paigntonzoo.org.uk or ring 0844 474 2222.