Parents warned about the dangers of loom bands

A Westcountry doctor has warned of the dangers of loom bands after they cut off the circulation in a childs fingers.

The loom band craze has been sweeping the country, with adults and kids making the bracelets made from small elastic bands.

A doctor revealed on Facebook that one child could have lost his fingers after he fell asleep with one of the bands wrapped around his fingers. 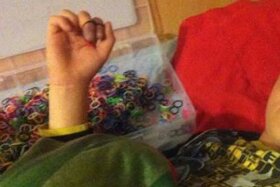 Fortunately the child was checked on  half an hour after going to bed and was found with purple/blue fingertips where the bands had cut off his circulation.

Another child was blinded in one eye when a band accidentally got flicked in his eye. The incident caused a blood clot – leaving him completely blind in his left eye – The boy is waiting for an operation to restore his sight.

Some schools have already banned them.

What do you think of the craze?

Stay safe on the road this summer

Stay safe on the road this summer