Police in Newton Abbot are appealing for information following a reported robbery and have issued a photo of a man they wish to locate in relation to the incident.

The incident occurred at around 6.00am on Friday, 31st October outside the Railway Station in Station Road, Newton Abbot.

The victim a woman aged in her 50’s was stood outside the Railway Station when she was approached by a man who grabbed her handbag and ran off.

He was chased by a member of the public who recovered the handbag but the suspect made good his escape.

Police are keen to locate and speak to Simon Isaac regarding this incident. He is aged 28 years, from the Taunton area and is described as being, a white man, 6 ft in height, slim/skinny build, with mousey short hair and a missing front tooth. 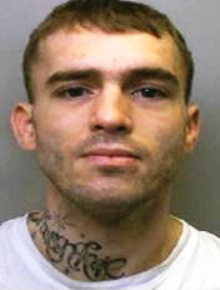 He also has distinctive tattoos, tribal or Arabic/Sanskrit writing on the right hand side of his neck.

Police would like to hear from anyone who either sees Isaac or knows of his current whereabouts to contact them on 101 quoting police reference CR/118604/14 or alternatively call Crimestoppers anonymously on 0800 555111 or report online at www.Crimestoppers-uk.org