Police are appealing for witnesses after an accident in Paignton.

The accident happened at approx 3pm yesterday, Saturday 26 July on Kings Ash Road, Paignton and involved a car and a Motorcycle, which resulted in the motorcyclist being airlifted to hospital.

The road was closed for over 8 hours whilst the scene was investigated by the police. 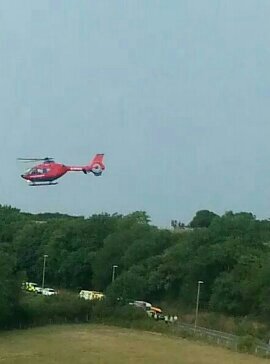 The weather conditions were warm, dry and sunny and the visibility was good.

Police have said
“The car was a green Peugeot 206 driven by an 84 year old local man travelling uphill towards the direction of Torquay. This vehicle for unknown reasons at this time has failed to negotiate a slight left hand bend and strayed into the oncoming traffic”

A 67 year old local man was riding his Skyteam 250cc motorcycle downhill in the Paignton direction  and was struck by the Peugeot.

The 84 year old driver was treated at the scene by paramedics for shock however, the 67 year old motorcyclist was taken to Derriford Hospital with serious leg and pelvic injuries. He remains in hospital in a serious condition”

A specialist forensic investigation of the scene took place. Police from the Serious Collision Investigation Unit are appealing for witnesses to this incident to contact them on 101 quoting log number DCP – 20140726-0585