Police are appealing for the public’s help in identifying a man after a number of vehicles were damaged in Rock Road, Chudleigh.

Six scrap vehicles were spray painted and their windows were smashed with a claw hammer at around 4.30pm on Monday 16 June.

Officers would like to speak to the man (pictured) in connection with the incident. He is described as in his early 20s, around 6ft tall and was wearing a white t-shirt. 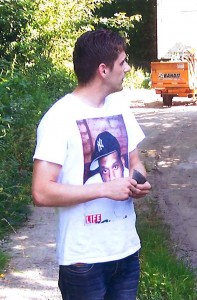 Police are also keen to trace a woman who was seen with the man in the area at the time. She is believed to be aged between 19 and 21, around 5ft 4ins, with long dark hair. She was wearing dark trousers and a light coloured top.

Anyone who knows the identity of the man or woman, or has any information that could assist with the investigation, is asked to call police on 101 quoting reference CR/083051/14, or alternatively call Crimestoppers anonymously on 0800 555 111.