Police investigating a serious incident in Newton Abbot on Sunday 24 August have released CCTV images of four witnesses they would like to speak to.

At 3.43am police were called to The Avenue after a man had been hit by a blue Peugeot 106 which failed to stop.
The four male witnesses (pictured) immediately approached the injured man who was on the ground. 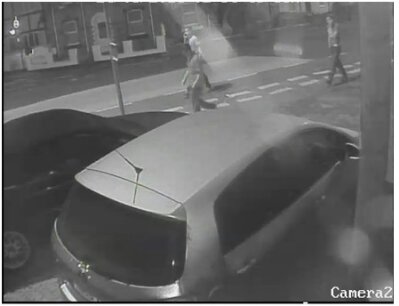 Detectives are keen to identify them as they may hold vital information and be able to help with the investigation.

Following enquiries, officers believe the incident initiated at a takeaway store on Queen Street, Newton Abbot, between two groups of men. Several members of the public were in the area at around 3am.

Police believe one of the groups of men may have made their way along The Avenue towards Balls Corner. When they reached the vicinity of the Volkswagen garage the group were struck by a the car which was subsequently parked in the vicinity of the multi-storey car park on Sherbourne Road.

The witnesses that police are keen to trace were at the scene at 3.30am and may have witnessed the earlier events in Queen Street.

The victim, a 22-year-old local man, was taken to Torbay District Hospital but later transferred to Derriford Hospital having sustained potentially life threatening injuries.
Two men, aged 18 and 21, both from Newton Abbot, were arrested on suspicion of attempted murder and released on police bail until 20 October.

Detective Sergeant Andrew James, Major Crime Investigation Team, said: “As well as the four witnesses pictured, we would also like to hear from anyone who witnessed an incident in Queen Street involving the two groups of men, saw the collision outside the Volkswagen garage or the blue Peugeot 106 being parked on Sherbourne Road.”

Anyone with information that could assist with the investigation is asked to call police on 101 quoting reference 203 of 24 August, or call Crimestoppers anonymously on 0800 555 111.

Pop up graffiti in Hollicombe, your views…

Pop up graffiti in Hollicombe, your views...