Local lad Luke Spiller, the lead singer of The Struts should be celebrating; the band released their new album this week and it is currently at number 34 in the album charts. Quite an achievement… 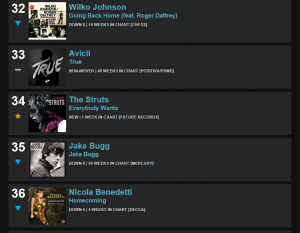 However, radio stations are refusing to give their singles any air time. Fans have tried to raise awareness by using social media sites, but so far have failed to get the band’s songs played on mainstream radio.

Luke had this to say via his facebook page:
“With no help from TV and being told that no radio station in the UK will play our singles, I have just received our mid week chart position! I cannot reveal where we are but we still need your help. Everybody who holds the keys to radio and TV are scared/confused about our music and image. But thanks to you amazing people we are fighting against the norm and we are making a lot of people re-think what The Struts are all about. Thank you so much! And keep spreading the word”

Twenty-five year old, flamboyant frontman Luke, is a former South Devon College student, who now lives in Teignmouth.
He joined Mike Oldfield on his album, ‘Man on the rocks’ [read more here], as well as that, The Struts have also supported The Rolling Stones.
Luke has an amazing voice and the rest of the band Addo Slack, Jed Elliott and Gethin Davies are equally talented.
So, why the lack of air play?

Like what you hear? The Strut’s album is available on itunes

You can also find them on facebook and online here: www.thestruts.com

Mike Oldfield is joined by former South Devon college student Luke Spiller on his new album 'Man on the rocks', Oldfield's first album of new material since 2008. "Although Oldfield has worked with…