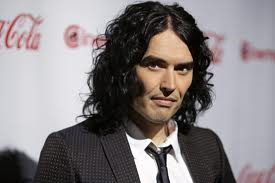 To answer this question we need to review and analyse why Russell would put himself on a stage where nearly almost every celebrity has failed before. What is the reason for his revolution and what is the true agenda.

The nation seems divided. People relate to what he is saying about a spiritual revolution and others believe it is a shameless egotistical rant to help promote his new publication Revolution. Is Russell really all about the money or is he from experience looking to change politics from his own personal beliefs at what he feels are right and wrong.

It is very clear that Russell began from humble beginnings. He was born in Grays, Essex and his parents divorced just six months after his birth. He was brought up in a single parent family were money was tight and life was hard. He often comments about his early battles with drink and drug addiction, personally suffering from the early demons the modern youth find themselves in. He was disillusioned about the lack of support for less privileged families and the fact that people in authority just didn’t seem to care.

When Russell left home after the young age of 16 that is where his life changed for the worst initially. He had devotion for acting but he quickly fell to the temptations of narcotics and his life began to spiral. Even after a helping hand by Essex’s Council to fund an acting academy he let himself down due to his addictions and poor attendance.

Russell began his rise to fame with one-man shows concerning his road to recovery and generally being brutally honest about his past in a humorous way. Better Now and Eroticised Humour were the platform to his success in modern TV like MTV, Big Brother and award shows which then launched his Hollywood movie success.

Russell is an energetic character and he certainly has the ability to capture the attention. I personally think it is a bit like marmite you either love or hate it. Nonetheless he does have the conviction to get his message across. What is his message and what does a spiritual revolution mean? From my research in his book and listening to his current The Trews video blog, what comes across to me is he is trying to engage people to think and ask questions. He is trying to get people to start engaging their own personal thoughts and opinions. He tackles current issues that we know in our hearts to be wrong. He confronts capitalism, foreign affairs, immigration, government corruption and elitism.

The major questions we are all asking are is this a promotional stunt to increase his millions? Is this a genuine effort to help bring change? Are we really that disillusioned with life and politics? Is Russell Brand creditable?

What is very clear now is that there is a large audience the government does not know how to engage. The young, the benefit class, and the middle/working class are now very far detached from the modern day money wasting and lavish lifestyles of Westminster. How can they understand our thoughts and fears when they find it hard to live on their 100K plus a year?

Russell’s current involvement with the movement Occupy has certainly helped to unite the local people to fight Council decisions that are clearly for back handed profit and not the people. In my opinion this is where Russell sees true change. The democracy system seems so complex and out of touch that sometimes we sit back and do nothing because we feel what good will it do anyway. In the whole that seems correct, when we vote for Labour, Conservatives or the Liberals it all seems much of the same so why do we bother. Russell I believe is trying to promote the benefits of localised power of the people. He is trying to get people engaging in local issues and righting local wrongs by making our councils and local politicians take note. Change has to begin somewhere and we elect these people to work for us not the other way around.

We know through history that when people get in a position to ask awkward questions the corporate owned media train close together to derail the person involved. Unless it seems to benefit the systems agenda the person gets ridiculed on small side issues, personal life or quotes that may or may not have been said. The recent Trews blog states I am not running for Mayor and quoted in the book states “It was not an inside job” when asked about 9/11. Yet the media only want to address these issues and not what seems to be the important issues of capitalism, social cleansing and elitism which 95% of the book and message is about. Russell has also stated that the profits from the book will go towards a very worthwhile cause to help the less fortunate people attain a better track to education and employment.

With this in mind I encourage more people to get informed about Russell’s movement. Time will tell the true agenda of Russell. I believe there is a message to encourage people to engage in their local community, stand up for what is right and not to be afraid to have a voice.

We only have to look at our own council at the moment for decisions being made without the peoples consent. We can choose to be educated about these decisions and say no, or we can sit back let it happen and just complain about it later.

The hugely popular Open Air Cinema Festival returns to Torre Abbey this August for a third consecutive year and promises two weeks of alfresco cinema magic. Set under the stars amongst the stunning…