There are many debates about the pronunciation of ‘scone’.

Yesterday there was some debate about the appearance of them too.

And here it is… 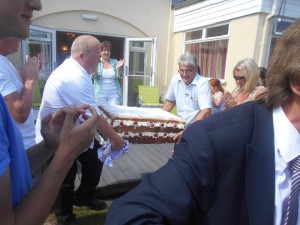 Filming is currently taking place at the Cavendish Hotel, Belgrave Road which will feature in Channel 4 series ‘The Hotel’

Mark Jenkins who appeared in the last series of ‘The hotel’ (Then at the Grosvenor Hotel also on Belgrave Road) returns, but this time as Entertainments manager.

So expect more events, Mark is sure to have something else up his sleeve!
(Maybe the inflatable dolphins will also make a return?) 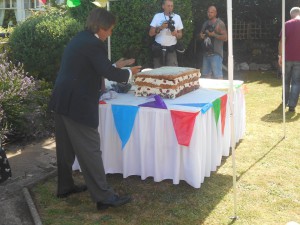 The scone didn’t enter the record books as planned but apparently tasted great!

Did you watch channel 4's cyberbully? If you missed it you can view it on 4 OD for the next 26 days Was this just a TV drama? The scenario, taken from real life accounts, actually mirrors the …

'The Hotel' returned to channel 4 last night. The documentary filmed at the Cavendish Hotel on Begrave Road, Torquay sees Mark Jenkins (previous owner of The Grosvenor Hotel which also featured on …

[fblike style="button_count" showfaces="false" width="450" verb="like" font="arial"] As we revealed on 19 May, channel 4 will return to Torquay for the fourth series of 'The Hotel' This time, it …