Update: In relation to the first body found, police have said:
“Enquiries are ongoing to establish the identity of the person although the remains are believed to be that of a man who went missing in Torquay in November 2014. His next of kin has been informed and the death is not being treated as suspicious,”

A search for missing man David Cauldwell has resulted in the discovery of 2 bodies in Torquay.

The first, which is believed to have been there for sometime, was found by Dartmoor Search and Rescue Team Ashburton last night (24th May) in the Petitor Woods area, the second was discovered by police this morning, approximately 200 metres away.

The area has been cordoned off and a full investigation is being carried out to establish the circumstances of both deaths. 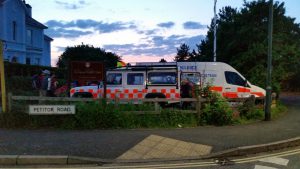 A spokesperson for Dartmoor Search and Rescue Team Ashburton said:
“During our search of the area around Petitor Point, around 20:45 one of our search teams found a body which it is believed had been there for some considerable time and not related to the search we were deployed on. This was reported to Devon and Cornwall Police who sent a team to investigate. Items found with the remains are being used to assist officers with identification.

“The second body was located by Police Officers at around 8.10am on Wednesday 25 May, which appears completely unrelated to the human remains discovered the night before. Formal identification has not yet taken place.

“The area has been cordoned off and a full investigation is being carried out to establish the circumstances of both deaths.”

A team spokesman said on news of the 2nd body being found. “With the body found by one of our search teams last night and the second discovery by the Police this morning, our thoughts and condolences are very much with the families of those concerned at this very difficult time, and we hope identifications are made quickly.”

David Cauldwell’s family have been informed of the developments in relation to the second body but formal identification has not yet taken place.