by We Are South Devon
in Community Projects

A Critically Endangered monkey with a rare medical condition has been treated by a team of zoo experts and South West veterinary specialists.

Animal care staff at Paignton Zoo Environmental Park took the sick primate for a CT scan at a veterinary hospital in Somerset. JR – full name Jean-Robert – is a brown or variegated spider monkey Ateles hybridus The species, which is listed as Critically Endangered, comes from South America.

Jo explained: “Vets and keepers had had concerns about JR for a while. Although he appeared well and active, there were subtle changes in his general condition that rang alarm bells. We took him for a CT scan as he had abnormally high cortisol levels in blood tests which led us to believe he might have Cushing’s disease. This can be caused by a small tumour on either the adrenal gland or pituitary gland.” 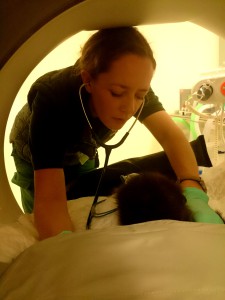 Jo and Celine anaesthetised him with the help of Cave’s Head Nurse Stuart Ford-Fennah and anaesthetist Nicki Grint. He was then injected with a contrast medium to highlight abnormalities.

JR is around 20 years old – in his prime for a spider monkey – and arrived at Paignton Zoo in 2010 from Zoo Frejus, in France. He is one of five brown spider monkeys in the Zoo’s troop, sharing his enclosure with Luna, Lijuana, Sophie and Paru.

Consulting imaging specialist Tim Trevail carried out the scan and analysed the images. Computed tomography (or CT) uses computer-processed x-rays to produce virtual slices of specific areas of the scanned body. Tim: “We found that JR has changes in his pituitary and adrenal glands consistent with an adenoma – a small benign tumour.”

Jo: ”This is not a malignant cancer but causes problems by secreting excessive amounts of a hormone. When the tumours are large they can be removed surgically, however as this was a very small lesion we are going to try medical treatment.

“This was a rare procedure, a rare condition and a rare species. It was a great team effort from Paignton Zoo staff and the experts at Cave Veterinary Specialists.”

Humans can get Cushing’s disease, although it is quite unusual. The prognosis for JR is fairly good. Jo: “Cushing’s disease requires long term treatment – there are a few options that we’re reviewing. The important thing is that JR is our breeding male. The condition can suppress fertility and – as the species is Critically Endangered – we are very keen for him to go on to father offspring with our females.”

Can you Help the over 50s Stay in Own Homes?