The man in charge of Paignton Zoo is moving his entire collection to Exeter.

Simon Tonge, Executive Director of the Whitley Wildlife Conservation Trust, the charity that runs Paignton Zoo, Living Coasts in Torquay and Newquay Zoo in Cornwall, is loaning almost 1,000 animals to the Royal Albert Memorial Museum. But they are all just a few centimetres tall.

You’d think the boss of a zoo would have enough real animals to occupy his time, but Simon Tonge has his own personal, miniature zoo in his office. And now he is loaning that large collection of small animals to RAMM’s collectors’ case. The mini menagerie will be on display until 25th September.

He started collecting in 1966 – this year is the fiftieth anniversary. He began when he was seven; eventually they went in the attic, but resurfaced thanks to his parents when he became a zoo director.

Extraordinarily, Simon has over 980 pieces in his collection, including 814 zoo animals, 156 farm animals, six zoo keepers… and two plants. The mini zoo is based around figures made by Britains Ltd (founded in 1893 and known originally for detailed military figures) but other makes are added opportunistically. They are mostly 1:32 scale, with a separate shelf for figures at other scales “if they are good models.”

Simon’s personal zoo has about half the number of animals the real thing boasts, takes up much less room – a couple of shelves and a window-sill rather than 80 acres – and costs almost nothing to feed and look after – they never need the services of a vet, for example. While real zoos no longer keep animals taxonomically, Simon does – and in appropriate social groupings, too. And there’s a computer spreadsheet to keep track of it all – just like the real thing.

Spreadsheet or not, Simon knows his collection down to the last plastic parrot. After his PA Helen Lawrence moved them to have his office redecorated and an extra shelf put in, he realised very quickly that there was an animal missing. “Certain curators have been known to rearrange them while I’m away, for example by placing a monkey in the mouth of a crocodile…!” 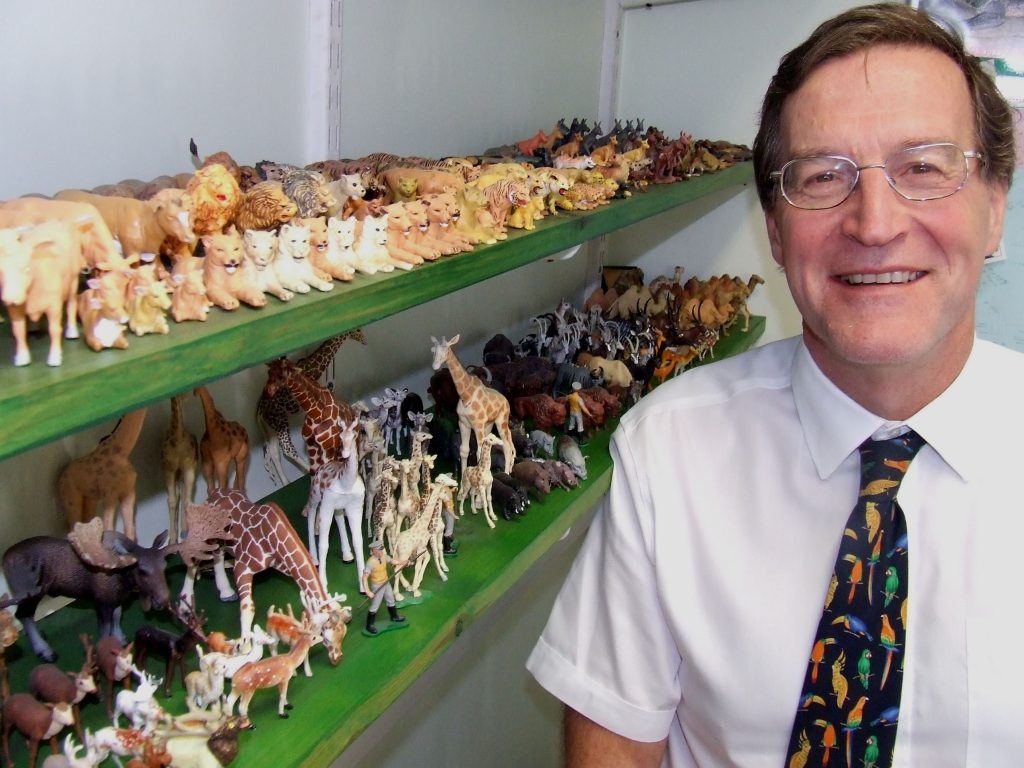 WWCT Simon and his mini zoo

There is no great philosophy behind the collection: “I just like animals! It satisfies my collecting instinct and is aesthetically pleasing to me.” It’s also something of a talking-point for guests to his office. These days Simon rarely adds to his collection: “Maybe once or twice per year.” Occasionally colleagues buy pieces, including the Trust’s Director of Living Collections Stewart Muir.

The rarest pieces in the collection are a Japanese serow (a kind of goat-cum-antelope) made by a Japanese manufacturer and a lying-down okapi from the US. One figure that is missing is a male lion made by Jeol Ltd.

Does Simon have a favourite? With a suitably-detached and scientific air he says no… “But the kangaroos with detachable joeys and the tiny platypus which I keep in a box because they are rare and easily lost are the gems of the collection.”

The Collectors Case is in Finders Keepers? – a gallery celebrating the people who gave RAMM its world-class collections and exploring the ethics and impact of collecting. Senior Curator, Dr Julien Parsons, said “Collecting is very much alive and well and is an important part of many people’s lives. This display allows us to showcase local collectors, adding contemporary voices to the gallery. Radios and rubbers, Hello Kitty merchandise, football paraphernalia, water from around the globe, irons, fans and political pots have all featured.

“Simon’s animals are sharing the space with some of our best-loved specimens. Their display coincides with Paignton Zoo’s rhino trail and leaves us to ponder on the future of the species represented in his collection.”

RAMM will host a Great Big Rhino in the summer, while Simon will give a talk on 24th August entitled Will the rhinoceros survive the 21st Century? An afternoon Talk for families and other animals. Tickets for the talk are available for £6 online at http://exeterramm.admit-one.eu/?p=tickets&perfCode=1061&ev=25548  or from RAMM’s reception in person or by ‘phone using a credit or debit card on 01392 265858 during opening hours: Tuesday to Sunday, 10am to 5pm.