In 1690 the French fleet was in Torbay, and while they were with us launched a devastating attack on Teignmouth.

They were there following the Battle of Beachy Head which was fought on 10 July 1690 during the Nine Years War. While Protestant William of Orange was successfully fighting the usurped the Catholic James II at the Battle of the Boyne in Ireland, the French had gathered a large fleet in the Channel. This was the greatest French naval victory over the English and Dutch during the war – the Dutch lost six ships and three fire ships, the English lost one ship of the line, while the French didn’t lose a single vessel. The English Channel then temporarily fell under French control. 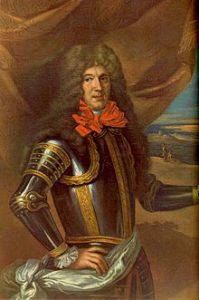 However, instead of following up their advantage, the French instead headed west and anchored in our Bay- theFrench Admiral Anne Hilarion de Tourville (pictured) being able to moor unmolested. It was reported, “On the 13 of July the French fleet was seen riding in Torbay, where all the forces of Devon were drawn up to oppose their landing.”

Presumably it was the presence of English troops and possibly the defensive walls and gatehouse of Torre Abbey that dissuaded the French from landing. Instead, “several of their galleys drew off from the fleet and made towards a weak, unfortified place, called Teignmouth, about seven miles to the eastward of Torbay. Coming very near, and having played the cannon of their galleys upon the towns, and shot near two hundred great shots therein, to drive away the poor inhabitants, they landed about seven hundred of their men, and began to fire and plunder the towns of East and West Teignmouth, which consist of about three hundred houses.”

The French ransacked the town for twelve hours and destroyed eleven ships, also, “killing very many cattle and pigs which they left dead in the streets”. Reinforcing the fact that this was also a religious conflict, they, “entered the two churches, tore Bibles and Common Prayer Books in pieces, broke down the pulpits, and overthrew the communion tables”. 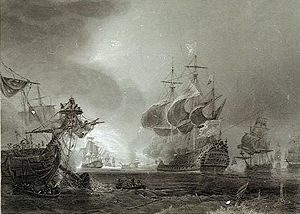 In another sources, a petition to the Lord Lieutenant, it was declared, “On the 26th day of this instant July 1690 by four of the clock in the morning, your poor petitioners were invaded (by the French) to the number of 1,000 or thereabouts, who in the space of three hours time, burnt down to the ground the dwelling houses of 240 persons of our parish and upwards, plundered and carried away all our goods, defaced our churches, burnt ten of our ships in the harbour, besides fishing boats, nets and other fishing craft”.

As an afterword on the attack it was reported that, as the French fleet weighed anchor and sailed west, while rounding Berry Head, “two slaves leaped from one of the galleys into the sea – one was recaptured; the second a Turk, after a desperate struggle for liberty, swam on shore, and was secured by the people who had witnessed the incident.”

The Justices of the Peace investigated the damage and found that, “By the late horrid invasion there were within the space of 12 hours burnt down and consumed 116 dwelling houses and also 172 dwelling houses were rifled and plundered and two parish churches much ruined, plundered and defaced, besides the burning of ten sail of ships with the furniture thereof, and the goods and merchandise therein”.

The Crown subsequently authorised the collection of £11,000 for the aid of the town – churches from as far away as Yorkshire contributed, and the collections enabled the further development of Teignmouth as a port.

The defeat of Beachy Head and the attack on Teignmouth caused panic in England. The diarist John Evelyn wrote, “The whole nation now exceedingly alarmed by the French fleet braving our coast even to the very Thames mouth”. The French had command of the English Channel and could have prevented King William from returning from Ireland across the Irish Sea and even land an invading army. To oppose this possible invasion, 6,000 troops, along with the militia, were prepared by the Earl of Marlborough.

The attack on Teignmouth was the last (‘foreign’) invasion of England, and the town’s French Street with its museum is named in memory of the occasion. Yet, the burning of Teignmouth was also an indication of the lack of a French plan.

The attack was symbolic but futile – diverting the French from pressing their advantage. And the day after Beachy Head, 11 July, William decisively defeated the French King Louis’ ally, King James, at the Battle of the Boyne in Ireland. James fled to France but appeals to Louis for an invasion of England were not heeded. Indeed, the failure to exploit their success was recognised by the French King and Tourville was relieved of his command. Perhaps if the French had concentrated on the bigger picture, rather than burning an insignificant coastal town, English history could have been very different.