On July 5 1703 a great fleet appeared in Torbay. This were the combined English and Dutch squadrons under the command of Admiral Sir Cloudesley Shovell (1650-1707). There were 40 English ships, along with 3 Dutch flag ships and 14 men-of- war commanded by the Dutch Admiral Alemond. The war ships were escorting, “a great fleet of outward-bound merchant ships”.

The object of the expedition was to come to the support of the Protestants in the Cervannes area of the south of France who had been, “goaded into insurrection by the Papists”.

The fleet was headed to the Mediterranean: “The general concern the English nation expressed for a people that fought for the Protestant cause, together with the solicitations of some illustrious French refugees in their favour, moved Her Majesty Queen Anne and his Royal Highness Prince George to propose the relieving of them in Council, and it was resolved that the fleet designed for service in the Mediterranean should endeavour to carry them a supply of arms, ammunition and money”. 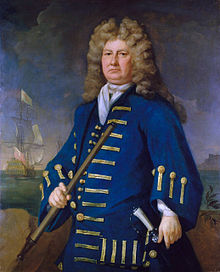 The recipients of the intended aid were Camisards – Huguenots or French Protestants of the rugged and isolated Cevennes region. In the early 1700s they had raised an insurrection against the persecutions which followed Louis XIV’s decision to make Protestantism illegal – Protestant churches had been destroyed and pastors exiled. The Camisards met the ravages of the royal army with guerrilla warfare and withstood superior forces in several pitched battles. In the autumn of 1703 came the systematic ‘Burning of the Cévennes’ which destroyed 466 hamlets and exiled their populations.

The French King had also provocatively supported the idea of an insurrection in Scotland which had further provoked English sentiment.

After 3 days in Torbay the fleet proceeded to the Mediterranean but doesn’t seem to have been much of a success in supporting the Camisards.

We don’t know whether HMS Torbay was present in that relief convoy. HMS Torbay was an 80-gun third rate ship of the line which had been launched at Deptford Dockyard on 16 December 1693. She saw action during the unsuccessful battle of Toulon but was decidedly more successful as she had broken the defensive booms in the Battle of Vigo Bay fought on 23 October 1702 during the opening years of the War of the Spanish Succession. 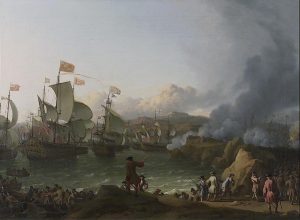 However, HMS Torbay was certainly there when Sir Cloudesley lost his life in the terrible shipwreck in the Isles of Scilly when four warships (Association, Firebrand, Romney and Eagle) foundered in severe weather on 22 October 1707. Perhaps 2,000 sailors lost their lives making the incident one of the worst maritime disasters in British naval history. The disaster has been attributed to a combination of factors such as the navigators’ inability to accurately calculate their positions, errors in the available charts and pilot books, and inadequate compasses. HMS Torbay suffered little damage in the disaster and finally managed to reach Portsmouth. 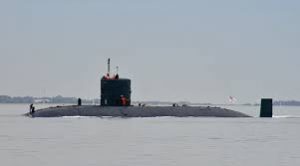 She was rebuilt at Deptford, and relaunched on 23 May 1719, her 80 guns being mounted on three gun decks instead of her original two. Though HMS Torbay was broken up in 1749, the name lived on the name of HMS Torbay- a Trafalgar-class nuclear submarine – the fifth vessel and the second submarine of the Royal Navy to be named after Torbay.