It’s fairly well known that Britain exported its criminals to Australia. What is less known is that over 52,000 British prisoners were shipped off to colonial America -almost 10 percent of migrants to America during the eighteenth century being British convicts. This took place from the early 1600s until the1776 American Revolution – and possibly beyond that date – and many of those convict ships visited Torbay.

This isn’t a comfortable fact for some Americans who prefer their country’s origins to be in persecuted people freely travelling to the New World and building, “the greatest country on Earth”.

Indeed, Britain had been shipping convicts to America for decades before they started sending them to Australia – it’s because of America’s fight for independence that we looked to other places. 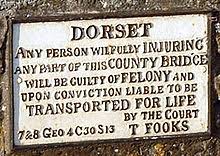 Many prisoners were taken in battle from Ireland or Scotland and sold into indentured servitude, usually for a number of years. However, by far the most common crime that led to transportation was petty theft or larceny – a third of the male convict population came under the category of ‘other larcenies’ such as pick-pocketing, receiving stolen goods, cutting false coins, and stealing clothes from washing lines. The penalty also applied to women – some female convicts were transported for crimes such as being ‘lewd’ and ‘walking the streets after ten at night.’

Getting banished to America was for a term of either seven or fourteen years, after which the convict could then, in theory, return to Britain. Returning early, however, was punishable by death.

Many of those sent to the American Colonies were put to work doing manual labour – Maryland received a larger quota than any other province while, as Virginia’s staple was tobacco, it became a centre of white as well as black servitude. Free Americans often objected to being Britain’s dumping of undesirables and some colonies tried to pass laws that would prohibit the practice. 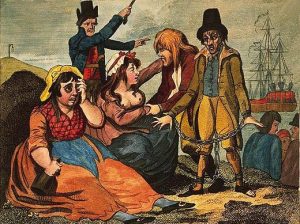 It’s generally accepted that the 1776 American Revolution brought transportation to the North American mainland to an end. The remaining British colonies (in what is now Canada) were regarded as unsuitable as it was thought that it might increase dissatisfaction with British rule, the possibility of annexation by the United States, alongside the ease with which prisoners could escape across the border.

However, there is an intriguing report from Torbay in 1784 about the deportation of prisoners intended for Baltimore – in 1755, convicts accounted for 12 percent of productive adult labourers in that city. We only know about this because some of them mutinied and escaped in the Bay. 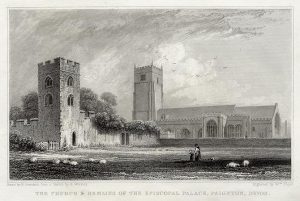 On April 14 1784 Captain George Cadman of the sloop of war The Helena wrote to the Mayor of Exeter regarding a ship bound for Baltimore with 160 convicts on board.

“A ship arrived here last night from London, with convicts w ho rose (mutinied) about 10 days since on the Master and crew. Sixty landed the same evening at Paignton and escaped. The Master informs me that they are a desperate set of fellows, and may commit many depredations”. The Captain further reported that others also sought their freedom, “Forty attempted to escape this morning, but my boats were so fortunate as to take them before they reached the shore.” 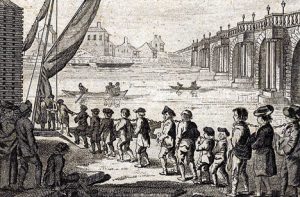 The Town and County magazine of April 15, 1784 followed up the story:

“Upwards of twenty were retaken here in the course of last night and today; the strictest search is still making by the constables and soldiers. Sixty that were taken in getting ashore were taken to Topsham by water this evening under convoy of the Helena’s crew, and from thence escorted to Bridewell (jail) by the military. There are about fifty left on board the ship. The whole number that were on board were about 160.”

24 of the recapture prisoners were tried at a Special Assize held in Exeter for that purpose before Mr Justice Heath. They received a death sentence but this was not carried out.