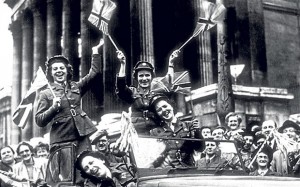 Victory in Europe Day, generally known as VE Day, was the public holiday celebrated on 8 May 1945 to mark the formal acceptance by the Allies of Nazi Germany’s unconditional surrender. It thus marked the end of World War II in Europe.

During the Second World War 1.1 million Canadians served in the armed forces. Of these more than 45,000 lost their lives and another 54,000 were wounded.  The Royal Canadian Air Force (RCAF) was involved in operations in Britain, northwest Europe, the north Atlantic, Egypt, Italy, Sicily, Malta Ceylon, India and Burma and with home defence. By 1944, it reached a peak strength of 215,000 personnel, the fourth largest allied air force.

At the end of the war, it was time to go home and the men and women of the RCAF were demobilised through a depot in Torquay. In eight months 33,000 personnel passed through their demobilisation depot. Around a thousand were women other ranks, officers and nursing sisters.

The depot was under the command of Group Captain JA Hutchison CBE of Edmonton Alberta. It was set up in June 1945 and divided into three wings situated in Torquay, Paignton and Babbacombe. At one time it had over 2,000 permanent staff. Over 80 of the staff had married while in Torquay, and approximately 500 of the men had married in transit. However, the proportion of those who married local women wasn’t disclosed. From Torquay the men and women of the RCAF made the journey to Liverpool or Southampton and then by ocean liner or less prestigious vessel to Canada.
Many of the Torquay’s leading hotels were used as quarters while the Canadians waited for available transport. The Torquay Times reported:
“Shipping is almost as rare a commodity today as it was during the war years and the RCAF has to take its turn with the allied forces and comrades in khaki and navy blue. Some may be in and out of Torquay within 24 hours; others may stay here days or weeks.”

In February 1946 the depot’s various sections closed down and control was transferred to the RAF bomber station in Topcliffe, Yorkshire. As a farewell gesture the airmen entertained local children at the Babbacome Concert Hall (later the Babbacombe Theatre). The children were given a film show and bags of sweets and chocolates.

At the depot’s closing ceremony, Captain Hutchison presented the last airman with a scroll and a bottle of rum. It was then announced that, on future Dominion Days, the Canadian flag of the overseas headquarters of the RCAF would fly on Torquay Town Hall.

In his closing speech, Captain Hutchison expressed his gratitude to the people of the Bay:

“At Torquay they were very happy. They came to love the people and the weather… as Canadians they fully realised what the people of this country had suffered and done to win the war. They were deeply appreciative and were proud to have been associated with them.”