A Torbay Hospital project, using virtual reality technology to create a more visual way for doctors to understand what it’s like to be a patient, is now at an important second stage thanks to the creation of low-cost cardboard viewing headsets by Google.

In April 2015 Torbay and South Devon NHS Foundation Trust, which runs Torbay Hospital, became the first organisation globally to use virtual reality (VR) for training clinicians in understanding the effect things such as communication, compassion, teamwork, equipment and workspace have on clinical performance and the quality of experience a patient receives.

Initially doctors involved in the project, known as PatientVR, were using a prototype model virtual reality headset to view an immersive film created by the Trust. The film showed the experience of a make-believe patient with chest pains and their journey from ambulance to Emergency Department and on to theatre. The plan was to invest in a further five headsets so that six doctors could be trained at any one time. 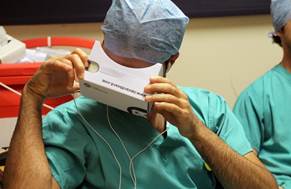 However, with Google’s introduction of more affordable and accessible cardboard headsets, used in conjunction with smart phones, the Trust is now able to give entire classrooms and multiple users their own interactive and immersive virtual reality experience.

Torbay and South Devon NHS Foundation Trust Director of Education, Dr Matt Halkes, said:  “The potential for using virtual reality in healthcare education is enormous, especially in teaching the humanistic skills of compassion and empathy, but to date the prohibitive cost has limited its application.

“However, the introduction of cardboard headsets combined with smart phones now makes it an affordable and scalable option, and has enabled us to realise our ambition of bringing virtual reality into the classroom.  This opens up an entirely new field of educational delivery and it is enormously exciting to be at the forefront of its development.”

The PatientVR project team has produced a number of 360 degree videos since the initial pilot film in order to help highlight and address humanistic concerns in healthcare to improve the patient experience.

The films are made using advanced recording and viewing technologies, incorporating a camera rig of seven cameras that are stitched together in a post-production process to create a 360 degree image. Once inside the VR headset the user gets an immersive experience where they are able to navigate the video by turning their head left to right, forwards and backwards, replicating the patient’s own field of vision, bringing the scene to life and creating a reflective experience based on the patient’s perception. 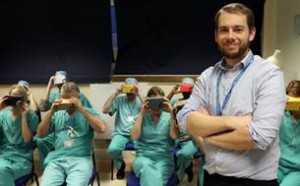 Nick Peres with classroom of medics

Torbay and South Devon NHS Foundation Trust Lead for Learning Technologies, Nick Peres, said:  “We recently used PatientVR for the first time with a whole classroom of clinicians and healthcare staff as an interactive tool to visually highlight potential communication issues in an operating theatre scenario.

“We found it really encouraged staff to look around the whole 360 degree space and identify those important elements of human factors and humanistic behaviour that happen all around the entire clinical environment, not just directly in front of them.

“Torbay Hospital is the first to use virtual reality in healthcare based classroom education and I believe this is just the start of our vision of a more interactive and effective way of teaching the importance of the patient voice and humanistic skills.”