Zoo colleagues preparing for the Virgin Money London Marathon have struck up a friendly rivalry, although they are based 80 miles apart. 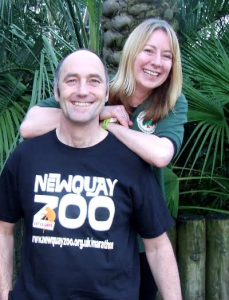 Izzy Warren runs through constant pain but is determined to complete the iconic run. Strongly dyslexic and with a smile that can fill a room, she was born in London and has lived in Worcester and Coventry before settling in South Devon.

She’s assembled an extreme CV: she’s abseiled down a church tower, cycled from Lands’ End to John O’Groats, completed the Three Peaks Challenge (taking in the highest points of England, Wales and Scotland) and jumped out of a plane at 1600 feet, all to raise money for the charity that employs her.

In the past she has thrown herself into skiing, horse riding, tennis, cycling and cross-country running with equal aplomb and tackled canoeing, kayaking and dancing with vigour. She has also taken part in local road and cross-country events. And on top of everything else, she enjoys wild swimming: “I make sure I go in the sea at least once a month, all year round, no wetsuit allowed!”

She has a martial art black belt and used to play in a men’s five-a-side football team, but even she draws the line somewhere. “I’d never do a bungee jump!”

She says that she is not competitive, but she is determined – especially when there’s sponsorship at stake! “After my first half marathon I couldn’t walk up or down stairs for nearly two weeks! I’m in constant pain from sciatica since a failed attempt at preparing for the Bournemouth Marathon last year. I’ve been having sports massages to ease the pain ever since.”

So why does she keep on running? “Maybe I’m having a midlife crisis!”

Newquay Zoo Curator of Animals John Meek has two big passions in life: wildlife and athletics. He’s worked with wildlife for most of his professional life, but now he’s combining the two to raise money for conservation. “It just seemed too good an opportunity to turn down!”

His love of sport started at secondary school in Somerset: “I was leading a cross-country run when the games master tried to head up the field. I was determined he wasn’t going to beat me! For the first time in my life I felt a rush of adrenalin and found myself running really fast … and yes, I did beat him!”

“The greatest gift I have ever received is a signed copy of Sebastian Coe’s book saying good luck and dated 2012 , my wife knows his wife!” He enjoys athletics and football and completed one parachute jump – “Never again!” – but he has always wanted to run a marathon.

“At 48 years of age I am apprehensive about getting round that long trip in London but it’s something I feel I need to prove to myself. When you are young you prove to others when you get older you prove to yourself.”

And the rivalry? It’s not about who gets to the finish line first, for both of them it’s more about testing yourself, getting there and raising some money for charity.