Here’s proof of just how cool penguins are – at a zoo in Devon they surf! To mark World Penguin Day, on 25th April, keepers at Living Coasts, Torquay’s coastal zoo, gave their penguins a hand-shaped surfboard.

Their miniature board was made by Circle One, based in Crediton, near Exeter. Circle One owner Jeff Townsley discussed the idea with the animal staff. He said: “In over 40 years of manufacturing and shaping surfboards I have never been asked to make a surfboard for such a surprising or worthy cause – but after thinking it over we were able to make one just right for penguins.”

OK, so none of the birds actually leaped on the board and started to recreate scenes from the 2007 computer-animated comedy Surf’s Up. But a two-year old macaroni penguin named Yoyo was happy to be snapped beside the board. Maybe by World Penguin Day next year he’ll be riding the waves! 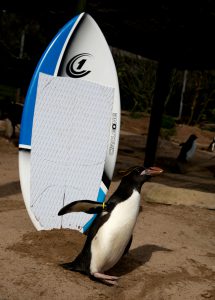 World Penguin Day is an excuse – as if anyone needed one – to celebrate penguins, to find out more about penguins and to raise awareness for the conservation of penguins. Living Coasts, a registered charity, supports penguin research, rescue and rehabilitation in South Africa.

Living Coasts’ Clare Rugg: “Zoos routinely use what we call environmental enrichment, including specially-designed toys, novel items and activities, to stimulate animals mentally and physically. Someone suggested a surfboard as a joke – but then we began to wonder what would happen if a penguin really had a surfboard…”

Yoyo was hatched on 27th May 2013 to parents Corin and Blue, but had to be hand-reared by keepers, so he is especially confident around people. For more information go to www.livingcoasts.org.uk or ring 01803 202470.