Great Big Rhinos come in a dazzling range of designs – and they also come in different sizes. Alongside the 40 artist-painted adult rhinos are 53 smaller, juvenile rhino sculptures. These have been decorated by local schools and community groups and occupy indoor public venues, forming a number of smaller trails across the county.

The Schools & Community Programme received support from the Arts Council England. £15,000 of National Lottery money paid for 30 rhinos to be distributed for free. The winners ranged from pre-school groups and children’s clubs to community groups and day care centres. Project organiser Pippa Craddock explained: “We were awarded the grant because the Project offered community engagement, free access to art through the trail, because we are a registered charity and are fundraising for conservation.”

Alphington Preschool was among the Arts Council winners – their rhino Splash is in the style of famous artist Jackson Pollock. Meanwhile, students at Torquay Girls’ Grammar School created the striking Sir Lockselot, who is covered in padlocks – making him the heaviest rhino of all. He can be seen at B&Q in Torquay.

The community rhinos are being displayed for 10 weeks as part of The Great Big Rhino Trail and will gather at Babbacombe Model Village during the autumn half-term. At the end of the Project, each rhino will be returned to its school or community group as a permanent memento of their involvement. 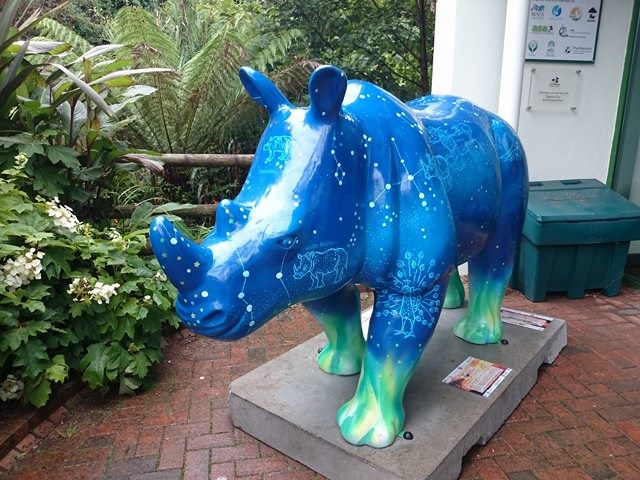 The Great Big Rhino Trail has put 40 life-size painted rhinos onto the streets and into the open spaces of Exeter and the English Riviera to raise awareness and funds for Critically Endangered wild rhinos. Free trail maps are available.