Conservationists in Nigeria supported by a Devon charity have taken the first photographs of chimpanzees in a region not widely recognised for its wildlife.

The Whitley Wildlife Conservation Trust, which runs Paignton Zoo, Living Coasts and Newquay Zoo, supports conservation work in the forests of South West Nigeria as a partner in the Omo-Shasha-Oluwa (OSO) Forest Initiative. The Initiative was set up in response to the massive deforestation that has occurred in this region and the threats to the remaining wildlife through habitat loss and hunting.

The camera-trap photos are the first firm evidence of chimps in this part of South West Nigeria for over a decade. Dr Andrew Bowkett, from the Trust, said: “This is tremendous news, as it seemed likely that this population had gone extinct due to the dramatic increases in logging and hunting over the years. It has come as something of a surprise, as all previous reports indicated that the closest chimps were in a hilly area in a remote corner of the reserve far from where the camera-trap was set up. The survival of chimps and other large mammals in such a threatened forest so close to the huge city of Lagos gives us hope for the Initiative.” 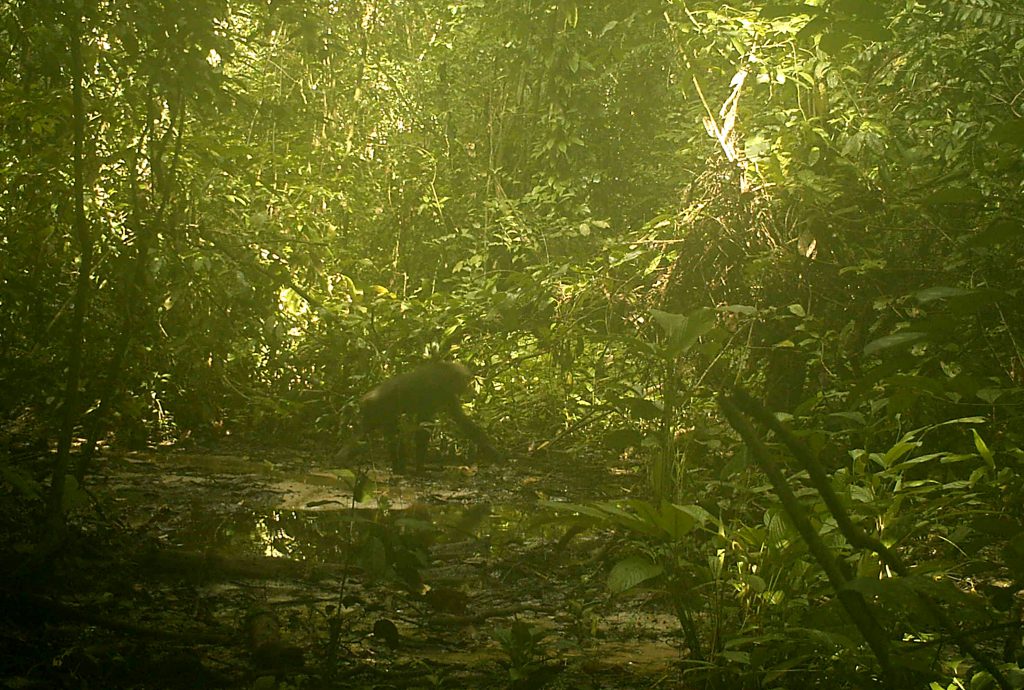 The camera-traps were set by the OSO Forest Initiative’s field team as part of their biodiversity monitoring programme. The team is mostly employed by the Nigerian Conservation Foundation with funding from the Whitley Wildlife Conservation Trust. Both organisations sit on the Steering Committee, together with other Nigerian institutions, and actively advise and manage the team, in the Trust’s case via e-mail and internet calls.

Paignton Zoo’s Louise Francis, who directs the education side of the Initiative, said: “We began supporting conservation in Nigeria in the 1990s. Unfortunately, the local project collapsed in 2001, just after discovering chimpanzees in Omo. For a long time after that the environmental education programme funded by Paignton Zoo was the only conservation presence in the reserve. It is fantastic to know that the chimps are still there, but we don’t know in what numbers. They must be highly secretive, as they have been hunted in the past.”

Conservationists have not seen chimps in the area since early 2000s. There are very few populations of chimpanzees in South West Nigeria. Although they are considered part of the Cameroon-Nigerian subspecies more commonly found near the border between those countries, little is known about them genetically. This is the rarest subspecies of chimp, with an estimated 3,500 – 9,000 left in the wild, but only 100 or so in the South West.

Andrew again: “Not many conservation organisations work in Nigeria and it is only really us and our partners active in the South West of the country. The biodiversity of these forests is interesting, as they fall midway between the main forest blocks of West Africa and the Congo Basin and so have a mix of wildlife from both, as well as some unique species. The region has sort of been ignored because it has lost most of its rainforest already, but discoveries like these chimps in Omo highlight how much there is still left to fight for.”

The Omo-Shasha-Oluwa Forest Initiative is a partnership between the Whitley Wildlife Conservation Trust, Nigerian Conservation Foundation and Forest Research Institute of Nigeria with the support of the Leventis Foundation and Environmental Resource Management, UK.

The Whitley Wildlife Conservation Trust is the charity that runs Paignton Zoo, Living Coasts in Torquay and Newquay Zoo in Cornwall, as well as several nature reserves in Devon. For more information go to www.paigntonzoo.org.uk or ring 01803 697500.