Hundreds of youngsters from schools across Torbay will be performing songs they’ve written and learnt together, in a special concert at Torquay’s Princess Theatre on 27 June.

The 2017 Sing Around the Bay Finale concert has been several months in the making and involves 400 students from two secondary schools and six primary schools.

The concert is presented by Devon’s community music and education charity, Wren Music, and the Torbay Music Education Hub – but the stars of the show are the students from Years 4-11 who’ll be taking to the stage in front of an audience of up to 1,200 people. 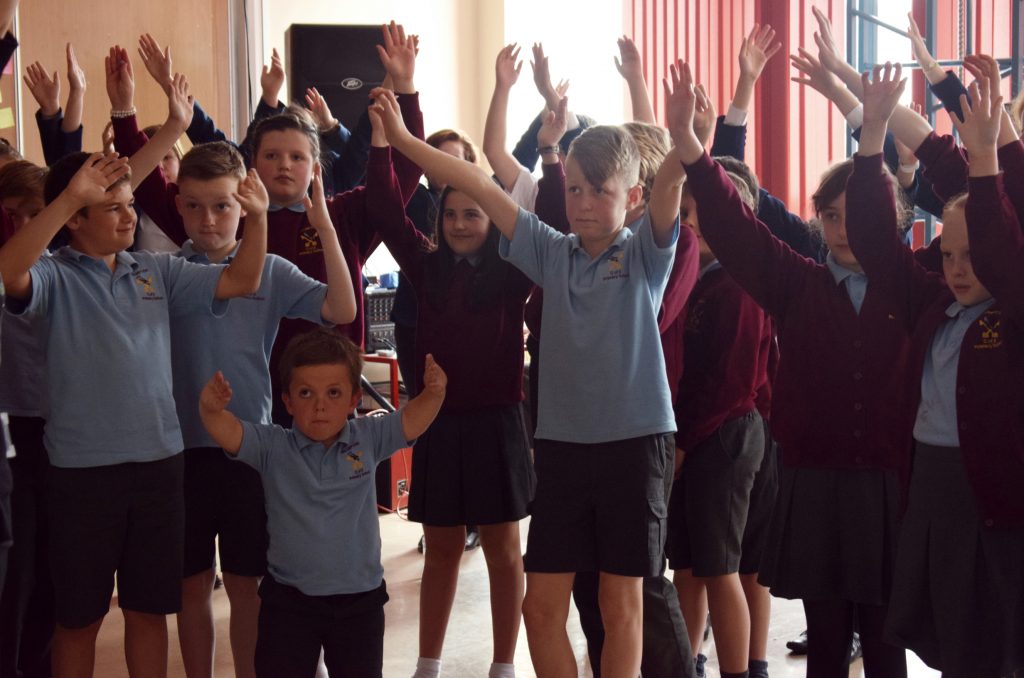 The show’s theme – freedom – and the title, ‘Free to Be …’ have been chosen by the students at St Cuthbert Mayne and Spires College, who wrote the songs and then taught them to their younger peers from years 4, 5 and 6 in their two hubs – St Cuthbert Mayne with Torre, Sacred Heart and Oldway; and Spires College with Shiphay, Collaton and Galmpton.

Marilyn Tucker from Wren Music explained: “We start off in September with a completely blank sheet and the first stage is for the students at the secondary schools to choose a theme. They really take the lead. This year, they chose ‘Free to Be …’ as the title – and the three dots at the end are very important.”

Around 20 students from years 9-11 at St Cuthbert Mayne wrote a song entitled Show Your True Colours, while the Spires College song is called Dragon and Crystal Ball: “The words of the songs are all about ‘let’s be better people’ but told in different ways,” said Marilyn, who, alongside fellow Wren professional musicians Sarah Owen and Paul Wilson, co-ordinated the song-writing process and offered support and guidance where needed throughout the project.

Having written and polished the songs, the secondary school students then visited the primary schools in the New Year to start teaching the songs: “This is my favourite part of the whole process,” said Sarah. “All we’ve done is given the youngsters the tools for them to go out and teach their songs to the younger children. It’s absolutely lovely.”

Then it’s a case of Wren making sure everyone has all the instruments and resources they need and of Paul, Sarah and Marilyn paying regular visits to help fine-tune the performances ahead of the Finale.

On the night, the schools will perform their own songs and a selection of songs about freedom. The programme will be completed by all the singers taking the stage together to sing songs on the theme, including Freedom Land and Freedom is a Voice. There will also be some specially-written songs, such as The Spires College composition, Fall into the Sky.

Six of Wren’s team will help to make it a professionally-staged show: “We’ll have our tech team there and we’ll have a bass player and a keyboard player, but although we will be there in the background, the concert is all about the young people,” said Marilyn. “They’ve taken ownership of it and that’s the key. It’ll be an evening for them to remember. It’ll be like the X-factor where they are guaranteed to be stars themselves.”

The Sing Around the Bay initiative has run every other year for the past eight years, making this the fourth Finale concert. In those eight years, thousands of students have had the opportunity to develop music, writing, leadership and life skills and had the chance to perform live at a major performance venue.

The project has received national recognition from Music Mark, which is the association for music education in the UK, and has been nominated for an award by the Paul Hamlyn Foundation, which funds projects that bring arts and creative opportunities to young people.

“We have to thank the Torbay Music Education Hub for partnering with us over the past eight years,” said Paul. “They see the value in terms of what the children get out of the project and it also meets a number of important GCSE curriculum targets.”

The concert runs from 6.30pm to 7.45pm. Tickets bought in person at the Princess Theatre are £5 for adults and £3 for children and pensioners. There is a discount for group sales of 10 tickets or more. Bookings made over the phone or online are subject to a Princess Theatre booking fee.