Jonathan Agnew MBE, a key figure in the world of cricket both as a former professional cricket player and world-renowned commentator on the game, is back on stage with his successful Evening With Aggers show. Following on from his first ever solo tour in Autumn 2018 regaling audiences up and down the country with some of his special memories and amusing anecdotes he is embarking on a new Spring tour and will arrive at the Paignton Palace Theatre on Saturday 4 May.

Agnew takes the audience on a trip down memory lane, waxing lyrical about his extensive and entertaining career on the cricket pitch, as well as his many years on TV screens and radio stations around the world. As a commentator and broadcaster on the BBC’s Test Match Special slot, A View From The Boundary, he has interviewed many a star of stage, screen and elsewhere, including two prime ministers, several rock stars, film legends, writers, comedians and a boy wizard! 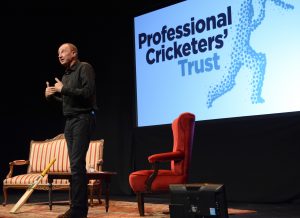 Producer, Simon Fielder said. “We can guarantee that anyone coming to see this show will have a thoroughly good time. It appeals to cricket fans and non-lovers of the game alike. You don’t have to be into the sport to enjoy the stories and humour of this highly entertaining evening, it will appeal to anyone who enjoys a good yarn.”

The shows are also raising money for the Professional Cricketers’ Trust (PCT), a fantastic charity supporting past and current players and their dependents during times of illness or hardship.

You can find out more about the PCT and the important work that they do at www.thepca.co.uk/trust/

For further dates and venues you can find out more and book your tickets online at www.simonfielder.com. You can also follow Aggers on social media @Aggerscricket and the shows @askaggers