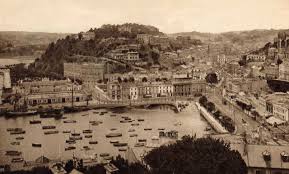 “I have seen more luxury since being in Torquay than in all my previous life, and I know I never saw such pitiable poverty before.”

We don’t have a lot of information on what it was really like to live in Torquay a hundred-or- so years ago. Most people just got on with their lives and didn’t bother to write down their mundane daily experiences. Therefore, it’s really useful to have a record of how it was to live in our town in the last years of the nineteenth century. One of our best sources comes, not from a local, but from a Canadian visitor to Torquay and, through her eyes, we can see how things have changed and, strikingly, how much they have stayed the same. 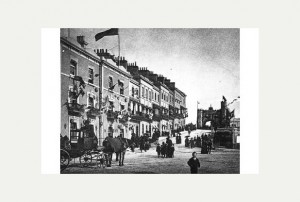 Isabella Cowen was born in Ontario in 1863. She later moved with her family to Illinois and then Iowa. In 1892-3 she and her sister Jeane travelled to England – she called us, “the land of formality and conventionalism”. While she was here she wrote diaries about her experiences. From November 1892 to March 1893 she was in Torquay. Her Aunt Belle’s Diaries give us a unique insight into our town from an outsider’s perspective as she often wrote of the things that she found unusual about the locals. 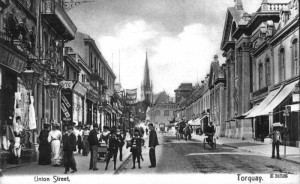 When they first arrived the sisters first found furnished apartments at 38 Abbey Road. They weren’t impressed and called their apartment, a “queer dark place”. Soon after they moved to 6 Torwood Terrace on Babbacombe Road where they found “the society of refined and intelligent neighbours”. However, having informed their landlady at Abbey Road that they were leaving, they believed that she took offence and retaliated by interfering with the sisters’ mail. Never upset a Torquay landlady…

This was, of course, the winter and it consequently rained a lot. Due to the weather, they spent a great deal of time sewing, reading and knitting. Belle remarked that the locals seemed to be fixated on whether it was raining, about to rain or if it had been raining. She wrote, “Torquay weather outdoes anything else I have encountered in the way of fickleness. The explanations and apologies for the state of the atmosphere are getting to be a very monotonous theme of conversation.” Perhaps some things never change? 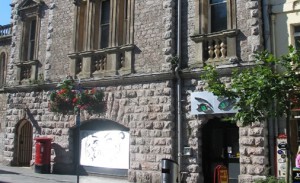 Our obsession with the weather may have been partly due to the topic being fairly uncontroversial and unlikely to lead to outright rows. This was unlike local politics which seems to have been much more important than it is today. In those days election counts held outside Torquay Town Hall – (pictured above when it was the Envy Bar) – would attract huge crowds and opposing party loyalists would disrupt public meetings such as those on Irish Home Rule. Torquay residents generally affiliated themselves to either the Conservative or Liberal parties. Indeed, the sisters were often regaled by the partisans of one party or another. “In the evening we yielded to the invitation of our housemaid, Annie, to go with her and her mother to see the ‘Carnival’ as it passed through Fleet and Union Streets. What we saw was a torchlight procession, very much inferior to what we expected from what we had heard of the procession. Annie and her mother, who are Conservative, accounted for the inferiority by its being under Liberal management. They tell us, the Liberals are so stingy they even refused to mark the event of Torquay organisation as a town, until forced to do so by the Conservative sentiment.” 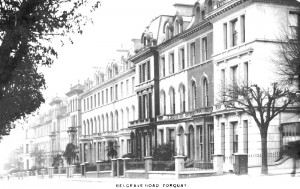 Of course, tourists would take time to view our most well-known attractions and we get a good idea of what visiting Torquay was like as the sisters walked around the town. For example, they toured Kent’s Cavern (pictured below) with a guide, though they couldn’t see much by the three candles provided. They were also a little put out as, “the guide would not allow us to break off any specimens with my hammer, but if I would let him take it he would give us each a piece which he would break off a fallen stalactite.” We’ll probably never know how much of the cave’s irreplaceable geology and artefacts ended up in the curio cabinets of visiting Victorians. 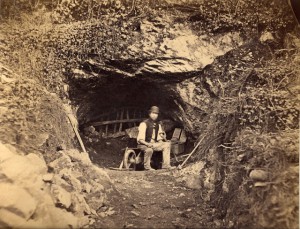 From its very beginnings Torquay was a health resort favoured by the most affluent in the nation. We were the richest town in England by the time Belle visited and, consequently, had a high population of those with poor health but with money to spend: “Torquay, I have found, has an unusual amount of wealthy people. It also has a seeming monopoly of invalids. Some days I found the pleasure of our walks along Rock Walk and the sands perfectly destroyed by the number of infirm old people and still more lamentable, deathly looking young people who haunt that particular place of pleasure.” Again, some things don’t change. The image below is labelled  ‘Invalids at Torquay’. 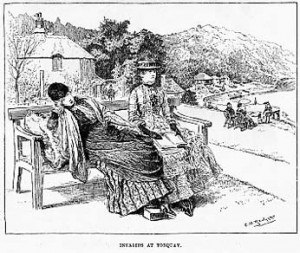 One of the things that took Belle by surprise was our drinking habits. She was shocked by the, “men and women whose bleary eyes and blotched complexion betray their liking for the inebriating cup”. She described seeing locals and visitors being drunk at all times of the day and of a general indifference to such behaviour which wouldn’t have been acceptable in her own home town: “Intemperance is too common a vice here and too fruitful of the misery both here and elsewhere to be made light of… As long as an Englishman can keep upon his feet he is considered quite respectable.” 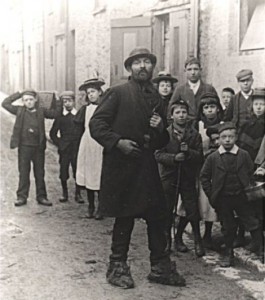 Fortunately for future historians, Belle went beyond “the fashionable throng that fill the Strand at noon”. She was unusual in that she deliberately ventured to Pimlico, an area of town which her Guide Book specifically advised visitors to avoid. (This is now the road that takes cars behind Union Street, past Twiggy’s Bar- pictured below). Belle was taken aback by the poverty and overcrowding she found. She wrote, “That day we came to Pimlico where we saw a hive of children. There seemed to be thousands. There were certainly hundreds of them playing in the streets. Poor little creatures! What a place to spend the only period of life one can expect comparative freedom from burdens of care and sin.” (The image above is of  backstreet Torquay in around 1901). 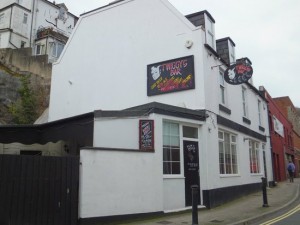 Offended by what she had seen, Belle went on to condemn, “the class that drive about in their carriages”. This was a class “which England recognises as respectable and worthy, but stands aloof from the poor wretches quite as innocent except for the crime of being poor. By the miserable system of rank and caste, she has hedged the poor about with a practically insurmountable wall, shutting out all hope for better days.”

We often assume that Torquay was a place of affluence and culture and that we were no different to anywhere else. However, Belle was widely travelled and she was still unprepared for what she saw. She wrote, “I have read of the close proximity of the overly rich and the very poor that exists in many cities, but I believe I speak the truth when I say I have seen more luxury since being in Torquay than in all my previous life, and I know I never saw such pitiable poverty before. Half-clad children with hungry pinched faces, and grown up beggars with something worse than either hunger or squalor upon their countenances are to be seen everywhere. All pity for such poor folk in England!” 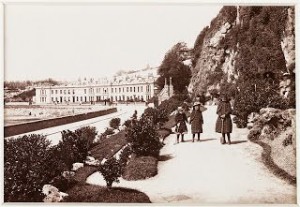 Our thanks should go to Isabella Cowen for taking the time to record what she had seen during her few months in Torquay in 1895. She has left behind a valuable record of what things were really like for so many of our ancestors in our town.

Aunt Belles’ Diaries can be read at Torquay Library.