Torbay Council is playing its part in Battle’s Over, an international commemoration marking 100 years since the guns fell silent at the end of World War I.

It begins at 6am with over 1,000 lone pipers playing Battle’s O’er, a traditional Scottish air played after a battle, outside cathedrals and other individual locations throughout the country and overseas, following which a specially written tribute will be read out.

At 6.55pm buglers will sound the Last Post at more than 1,000 locations, where at 7pm WW1 Beacons of Light will be lit in a tribute signifying the light of peace that emerged from the darkness of four years of war.

Then at 7.05pm over 1,000 churches and cathedrals will ring their bells as part of Ringing Out for Peace organised in association with the Central Council of Church Bell Ringers, which represents 65 societies of ringers from the British Isles and overseas. Also at 7.05, more than 140 town criers will perform a specially written Cry for Peace Around the World, the first of them in New Zealand and then across the globe through the various time zones. 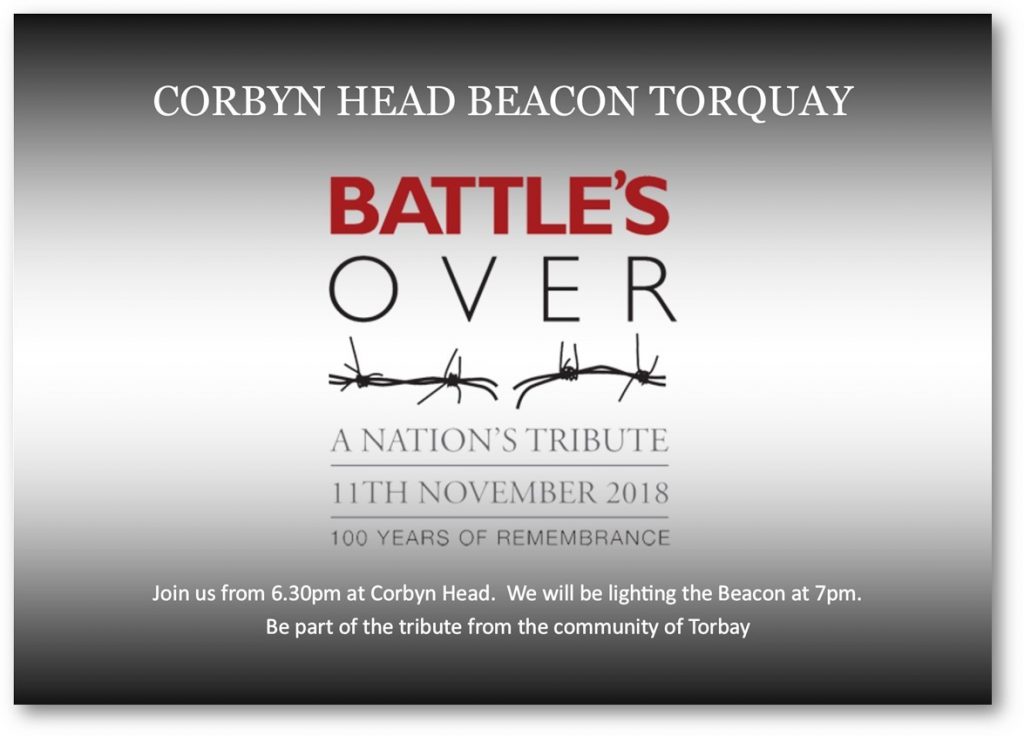 Torbay Council is taking part in the following events:

Torbay’s Elected Mayor, Gordon Oliver, said: “We are proud to be playing a part in this historic international event to commemorate the centenary of the end of the Great War, and to recognise the contribution and sacrifice made by the men and women from our own community.”

Armed Forces Champion, Cllr Nicole Amil, said: “It is so important that we don’t forget this extremely poignant time in history. By lighting these beacons, Torbay residents can pay their respects in a symbolic and fitting way.”

Bruno said: “It’s wonderful to see the event being embraced by so many organisations and communities in this country and around the world. The centenary of the end of the Great War is an opportunity to acknowledge the enormous sacrifice made by the millions of men and women who died or were wounded, as well as those who worked tirelessly at home in our fields and factories. It has been a privilege to work on this project with the support of so many amazing organisations.”