Berry Pomeroy Castle, between Paignton and Totnes, has long been known for its ghost stories, the most well-known being the White Lady.

The ruined castle was the focus of a day-trip for Victorian visitors to Torquay, and guides are likely to have either invented or transferred ghostly sightings from other places. They’re the usual – apparitions, fake histories, terrified dogs – and are reviewed in a 1982 book by Deryck Seymour ‘Berry Pomeroy Castle’.

However, one story in the book stands out as unusual. It doesn’t even focus on the mediaevil building but a near-by landscape which presumably has slipped back in time. Related by a Miss E Beveridge, it takes place on an afternoon in May: “A South African friend was staying with me, and going out late one afternoon we turned down a lane… leading to the Castle Mill of which I knew nothing. Half a mile or so along this lane my friend’s easy flow of chatter died away and an uncomfortable silence ensued which I found impossible to break… 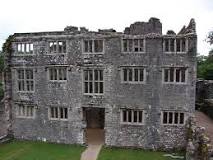 “We had both simultaneously become aware of something strange and oddly disquieting in the atmosphere; then I was struck by something unusual in our immediate surroundings which I could not at first identify. I puzzled over it for a moment before I realised that the fowls scratching in a sloping field beside the track were of a breed I had never before encountered, scraggy, long-necked creatures, and in lieu of ordinary chicken houses were rough shelters of turves and branches, while certain domes of plaited straw like old fashioned bee-skeps apparently housed a few broody hens sitting on their eggs. 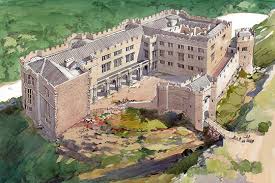 “It was perfect afternoon in May, no breath of air stirred, sunlight lay warm and golden (but) there was something very eerie in the atmosphere. The silence was profound, uncannily so, for the environs of a mill even so remote and small as this.

“Suddenly we rounded a corner and found ourselves in a tiny farmyard, the house to one side, some ramshackle sheds on the other side and before us a swiftly flowing stream. 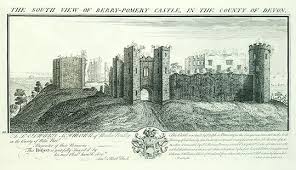 “The house was small, low and incredibly shabby, with small, deep set windows overhanging with ragged thatch. The only living creature… was a little girl of eleven or twelve who was sitting on the low wall which partly enclosed the yard next to the pool or stream. I never saw such a little savage – dirty and unkempt, with swarthy skin and coarse black hair which looked as if it had never known a brush or comb, and smouldering black eyes which were fixed on us in an unwinking stare of such intense malignity that we felt ourselves more than ever intruders where we had no right to be. Her dress looked like nothing on earth but a filthy sack with holes but in it for head and arms, and a piece of rope loosely tied about her waist. She was sitting hunched with chin on hands and elbows on knees, bare legs drawn up so that the soles of her feet were pressed vertically against the wall. Without moving a muscle she crouched there, glaring at us in a deadly silence that could be felt.” 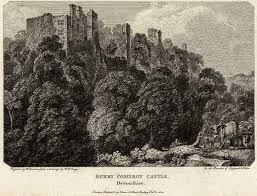 Feeling uneasy, the ladies reversed their car and fled. A fortnight later Miss Beveridge visited the Mill again, “The strange fowls and the rude shelter had vanished, and in their place were wooden henhouses of the usual type.

“When the mill house came in sight, I noticed at once that it had been completely rethatched. The roof appeared much higher too, to provide a second story… the windows seemed larger, the leaded panes winking in the evening light where before had been dark gaping holes… innocent of glass. A new wing had been added… there was no dark, malevolent little damsel crouching on the wall and the atmosphere was perfectly normal and serene…”