Bestselling Author to Talk About life with Cats at Torquay Museum

Local best-selling author, Tom Cox, who has written several critically-acclaimed humorous books on cats, will talk about the moggies in his life at Torquay Museum on 12th March, including The Bear, star of the social media phenomenon My Sad Cat.

Tom has an army of fans, including more than 800,000 followers on Facebook, and last year launched his hugely well-received book, Close Encounters of the Furred Kind. 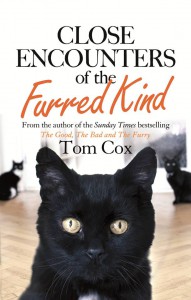 Since quitting his job as The Guardian newspaper’s Rock Music Critic in 2000, Tom Cox has written eight books, including the Sunday Times Top Ten bestseller The Good, The Bad and The Furry. Tom lives near Totnes and writes a monthly diary for Devon Life Magazine, and also hosts a fortnightly radio show on the experimental rural radio station Soundart.

Tom will give his talk against the backdrop of Torquay Museum’s new and exciting temporary exhibition, Claws! The Human History of Cats, which tells the extraordinary story of the relationship between humans and cats, from distant prehistory until the present day.

Book your tickets for Tom’s talk by calling Torquay Museum on 01803 293975. Tickets are priced £10, and booking in advance is essential as places are limited. Tom will also sign copies of his books, available from the Museum’s shop.